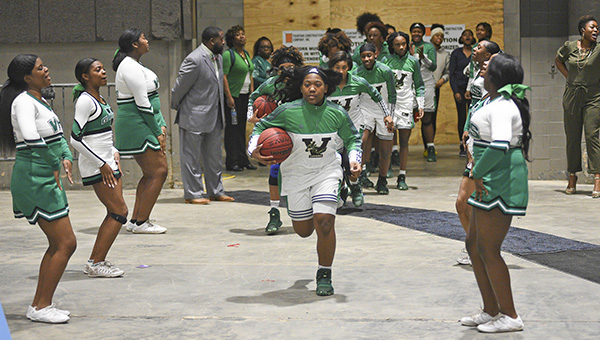 Vicksburg High's Sha’kora Knight (15) leads the team onto the court before their MHSAA Class 5A semifinal game against Brookhaven in March.The Missy Gators reached the state semifinals for the first time in 23 years. (Courtland Wells/The Vicksburg Post)

This is part of a series recapping Warren County’s top sports stories of 2020. This story was originally published on March 28, 2020.

Troy Stewart has a problem.

After spending a lot of time looking over his roster, and this season’s stats, hard decisions must be made. Some of his players will be happy, and some might be disappointed. Such is the price of success.

“The hardest part of my job this year is trying to get the awards night prepared for our banquet,” Stewart said. “I don’t know who’s the MVP, who’s the best offensive or who’s the best defensive because there were six or seven ladies who had double-digit points every night. And defensively, it depends on if you’re looking at rebounds or steals. It’s a good problem to have.”

One award that wasn’t in doubt is The Vicksburg Post’s basketball Coach of the Year award. Stewart was an easy choice after leading Vicksburg High’s girls’ team to a 20-11 record and a trip to the MHSAA Class 5A semifinals for the first time since 1997.

“I’m more happy for the girls than I am for me,” Stewart said. “It’s a school and city and team victory, not just mine. I’m proud of the fact that I’m in a position to get this job, and proud of the ladies and what they’ve done. My coaches and myself, we planned to make a run like we made and we were just happy to be in the position that we were. We want to thank everybody.”

The Missy Gators finished 4-21 in the 2016-17 season. Coincidentally, at the same time Stewart was enduring a 4-22 season at McLaurin that he said made him question his abilities.

Stewart returned home the following year to take over his alma mater’s girls’ program and immediately started to turn things around for both himself and the team.

Blessed with a young roster that effectively allowed him to start from the ground up — his first Vicksburg team only had three seniors — the Missy Gators went 15-14 and won a playoff game in the 2017-18 season. They improved to 18-13 the following year and again reached the second round of the playoffs.

“It’s easy to see that the talent we had lent itself out to be a great team,” Stewart said. “The talent we have is what has built us. The seniors we have now were sophomores when we got there. Their buy-in and the dedication they had to becoming great players was instrumental to us becoming the team that we are now.”

Stewart said last season’s second-round playoff loss to Lafayette pushed the team to be even better this year, but the first half of the season was a bit uneven. The Missy Gators reached the Christmas break with a 6-5 record.

Starting with a run to the championship game of the Jackson Public Schools Tournament, however, they flipped a switch. The Missy Gators won nine of their next 12 games. After two losses to finish the regular season, they then won four in a row in the postseason before the run ended with a 56-46 loss to Brookhaven in the Class 5A semifinals.

The postseason run included Vicksburg’s first region tournament championship since 1997, and its farthest advance in the state playoffs since reaching the Class 5A title game that same year.

“While it’s happening, I’m so focused on the next day and the next game that I never get a chance to fully sit back and look at it,” Stewart said. “Now that I’ve had a chance to look at what we did this year, of course we’re proud. But I think what we did last year was more of a catalyst toward this year because the girls wanted it extremely bad last year and worked extremely hard toward that goal. The juniors made sure it wouldn’t happen to them again.”

While also praising his players, Stewart gave plenty of credit for the team’s success to his assistant coaches Deatra Robinson-Cable and Olivia Davis. Both have been with him for all three seasons. Robinson-Cable is the daughter of former VHS boys’ coach Dellie C. Robinson, who Stewart worked under before leaving to become McLaurin’s girls’ coach from 2015-17.

“I brought in (Robinson-Cable) because I knew that everything I had been instilled, she had been instilled. So the program is going to be better because we’re all on the same page,” Stewart said. “Those two came in with me. We walked in together. We trust each other on and off the floor. I have a history with Olivia as well, because she was my next door neighbor my entire life. So there was a trust factor where if we get in here together, and build this together, she would be loyal and dependable.”

There is also plenty of trust between the coaches and players, especially now that Stewart’s methods and system have proven effective. Five players averaged at least six points per game this season. As a team, the Missy Gators averaged 11.4 steals per game.
By the end of the season, the Missy Gators used an 11-player rotation in most games.

“Our depth has been a key for us the entire year, simply because no team we play can key on any individual. You have to key on our team. You have to be able to stop the things we do,” Stewart said. “Every night, this entire year, different people stepped up and were the leading scorer, or the leading rebounder or assist person. Which goes to show, the things we’re implementing in practice work across the board and not just with one or two people.”

More importantly, the depth on the Missy Gators’ roster this year is not going away. Only four seniors — Tiarra Jones, Karmen Davenport, Nykeria Shelton and Nature Hall — are graduating. Jones and Davenport were starters.

Among those returning are sophomore Destini Sims, the 2020 Vicksburg Post girls’ Player of the Year, and talented freshmen Layla Carter and Janiah Caples who contributed to the team’s playoff run. Along with returning juniors like Sha’Kora Knight and Yakia Burns, the Missy Gators have been able to stack together several classes and build a program that shouldn’t just be a one-year wonder.

“As long as we can keep everybody together, keep progressing the right way in the classroom and outside of the classroom, I’m sure we’ll be able to continue doing what we’re doing in the gymnasium,” Stewart said. “We’ve just got to keep them on the right track and on the right path, and keep them out of harm’s way away from basketball.”