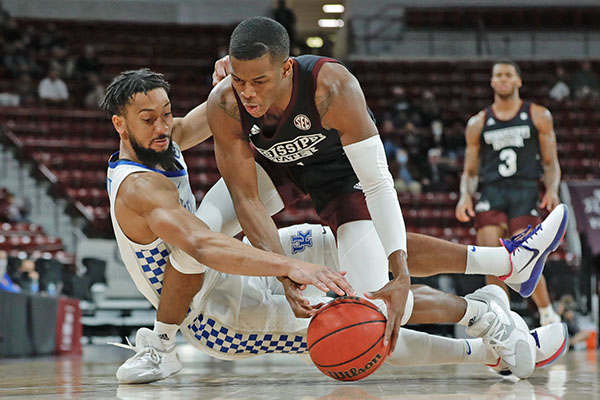 Allen made a game-tying 3-pointer with 1:08 remaining in the first overtime, and then a jumper and another 3-pointer in the second. Kentucky outscored Mississippi State 8-2 in the first 2 1/2 minutes of the second overtime to finally take control of the game.

Olivier Sarr had a double-double for Kentucky (2-6, 1-0), with 14 points and 12 rebounds. Devin Askew and Brandon Boston Jr. scored 11 points apiece.

Kentucky beat Mississippi State for the 15th consecutive time, and ended its own six-game losing streak this season ­— the program’s longest since the 1988-89 season.

It also snapped Mississippi State’s 13-game home winning streak, which had been the longest active streak in the SEC.

The 29 points was double Etienne’s season average of 15.3 a game. He scored 19 in the second half, with 11 of the Shockers’ 13 points during one stretch to almost single-handedly keep the game tight while Ole Miss led for most of the final period.

Devontae Shuler led Ole Miss (5-3) with 20 points and KJ Buffen added a season-high 18. Shuler made a career-best six 3-pointers. Romello White, who was 4-for-5 shooting in the first half, scored three points in the second, taking just one shot.

Tydus Verhoeven added 11 points and Bryson Williams had 10 for the Miners, who led by one point at halftime but blew the game open in the second half.

Mississippi College went on a 17-4 run to wipe out a 10-point deficit late in the second half, but couldn’t close it out. Alabama-Huntsville outscored the Choctaws 6-2 in the final 1:20, with four of the points coming at the foul line.

Shulman finished with 21 points and 12 rebounds for Alabama-Huntsville, while Seth Swalve scored 17 points and Sam Orf had 15.