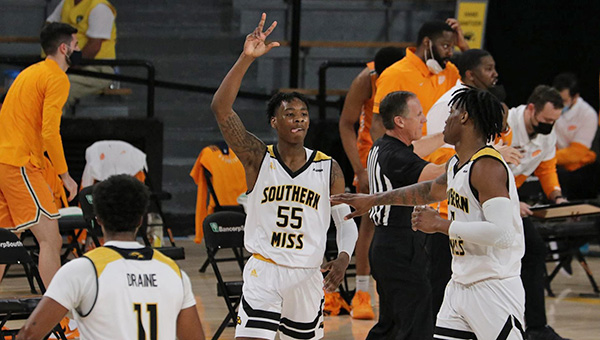 HATTIESBURG — It may be a new year, but it’s the same streak for the Southern Miss men’s basketball team.

Southern Miss wiped out a seven-point deficit in the last 45 seconds of regulation, then dominated the overtime period for an improbable 74-66 victory over UTEP on Friday night.

“When you’re in a rebuilding situation, you can sometimes get a signature win,” Southern Miss coach Jay Ladner said. “Of course, we won’t know that until we see what happens the next 17 games. It was a great start to league play. UTEP is a very talented, well-coached team. That comeback showed me something. I would have been proud of them even if we lost. They still defended and rebounded, and we found just enough offense to win.”

Tyler Stevenson led Southern Miss with 26 points and 10 rebounds. He also keyed the comeback with two big baskets in the final minute.

UTEP went on an 11-4 run late in the second half to take a seemingly-safe 60-53 lead. The Tyler Stevenson converted a three-point play and added a put-back with 23 seconds left to pull Southern Miss to within 60-58.

Jaron Pierre Jr.’s defense deep in the backcourt and almost near the baseline forced UTEP to step on the line, and Pierre was clutch again with a driving finger-roll around the top of the key with 15 seconds left for the tie.

UTEP was unable to get a shot off in its final possession.

UTEP missed two 3-pointers on the ensuing possession, and DeAndre Pinckney pulled down the rebound and hit the ensuing foul shots to effectively put it away.

“UTEP looks like a big-time team,” Ladner said. “They are big, strong, physical and quick. I was very proud of our guys for making some big plays to get us to overtime, and we took control from there. We played smart, got the ball in free-throw shooters’ hands and executed well on offense.”

Pierre finished with 15 points for Southern Miss, Hardy scored 11, and Pinckney had a double-double with 11 points and 10 rebounds.