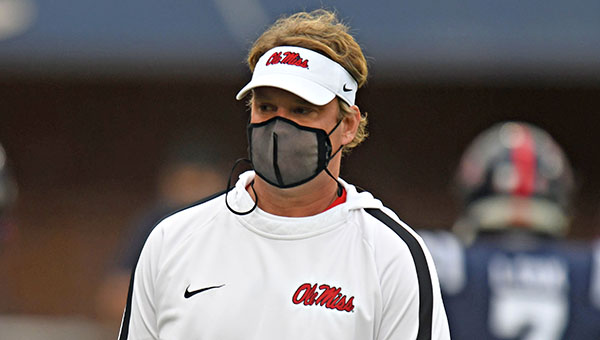 Ole Miss football head coach Lane Kiffin looks around before the game against Mississippi State earlier this season. Ole Miss announced Saturday that it has reached an agreement with Kiffin on a new contract. (Bruce Newman/Ole Miss Athletics)

OXFORD (AP) — Just hours before he led Ole Miss into its first bowl game in five years, head coach Lane Kiffin was rewarded for getting them there.

Ole Miss announced Saturday that it has reached agreement in principle with coach Lane Kiffin on a new contract. The contract details have not been completed.

“This is an investment in the future of Ole Miss Football,” Vice Chancellor for Intercollegiate Athletics Keith Carter said in a statement. “We hired Coach Kiffin with the hope of revitalizing our football program, and in just one short year, he has done just that.”

Ole Miss broke the Southeastern Conference record for total offense in conference games, averaging 562.4 yards, and ranks among the top 20 nationally among Bowl Subdivision teams in 10 categories. Those also include scoring offense (40.7), rushing offense (217.7), passing offense (344.8) and passing yards per completion (14.99). The Rebels completed 71.4 percent of their passes and converted on third down 50.4 percent of the time.

The Rebels finished with a 5-5 record after beating Indiana 26-20 in the Outback Bowl on Saturday.

“His innovative offensive approach has shattered SEC records, and with a top-20 recruiting class coming in, the future is bright under Coach Kiffin’s leadership,” Carter said. “We are committed to him and providing the resources necessary to elevate this program to greater heights.”

In a career that has included stops at Florida Atlantic, Southern California and Tennessee, Kiffin has a career record of 66-39 following Saturday’s victory.

“While I’m proud of what our team accomplished this season, we have higher aspirations for Ole Miss football,” Kiffin said in the statement. “This is just the start, and I look forward to continuing to build a championship program.”