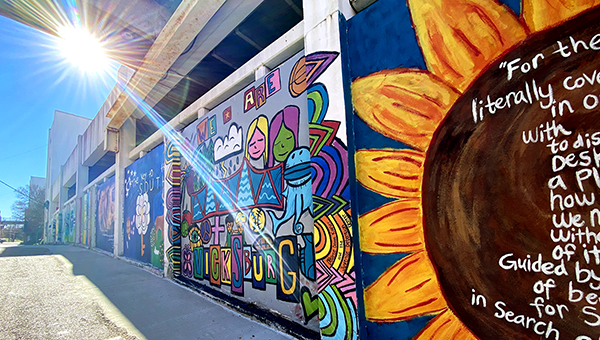 City officials recently accepted the donation of property along Gordon's Alley in downtown Vicksburg that will soon be the site of a new dog park. Gordon's Alley, located between Washington and Mulberry streets, is also home to the Washington Street Murals. (Tim Reeves/The Vicksburg Post)

Dog owners living in the downtown area now have a special place to take their animals for exercise.

The Board of Mayor and Aldermen Monday accepted the donation of a 50-foot by 100-foot section of land behind Peterson’s on Gordon’s Alley for a dog park.

Gordon’s Alley is located between Washington and Mulberry streets.

Under the agreement accepting the land from owner Mary Jane Wooten, the city will pay $685, which is the property taxes due on the property.

Wooten said the property was already attached to the Crawford Street park “and I believe in expanding our parks. We also have people living downtown with pets and I knew that a dog park was very much needed. We need more green space.”

“I hope people will use it because Washington Street Park is not a dog park,” Mayor George Flaggs said. “We have to realize that there are more people who have pets and we have to do something to accommodate them. “We were able to help them and get that property at a good price.”

Flaggs said the dog park is the first of two that will be in the downtown area, with the other located just “up the hill” from Washington Street Park. Work on that dog park has already started, as Deer Park Fence Company recently completed the installation of a decorative metal fence around the area.

When the two downtown dog parks are completed, Vicksburg will have three in all. The first was built at the Vicksburg Municipal Airport off U.S. 61 South as a project of the 2017 Leadership Vicksburg class and included a small and large dog enclosure.

The park, which is near the Vicksburg Community Garden, was opened to the public and dedicated in 2018.