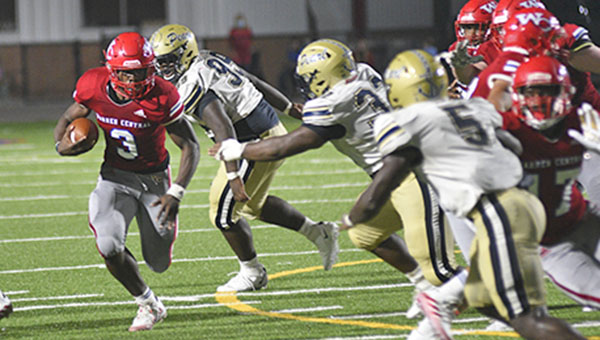 Warren Central’s Timothy Thompson (3) runs against Pearl during a game in September. Warren Central and Pearl will play again, this time as Region 3-6A opponents, in 2021 and 2022. (Courtland Wells/The Vicksburg Post)

Warren Central’s 2021 football schedule will include the defending MHSAA Class 6A champion. For the first time in a generation, it will not include two familiar rivals.

The Vikings will make their debut in Region 3-6A by hosting defending Class 6A champion Oak Grove on Sept. 24, according to the 2021 schedule released this week. It’s part of a region schedule that is brand new — Warren Central moved to Region 3-6A in the MHSAA’s latest realignment, after spending the previous 25 years in Region 2-6A — but no less challenging than what they’d become accustomed to in what was often considered the toughest league in Class 6A.

Other home games on the 2021 schedule include Germantown, Northwest Rankin, Pearl and Petal. There are road games at Vicksburg, Brandon, Terry and Meridian. Warren Central will also play Forest Hill in the Red Carpet Bowl at Vicksburg High, on Aug. 27 in the season opener.

Warren Central will host Ridgeland in a preseason jamboree on Aug. 20.

The 2022 schedule will be the same, except home and away games are flipped.

“You’re going to run through cycles and you have teams that are usually pretty danged good, and I think both of these districts are that way,” Warren Central coach Josh Morgan said. “There’s not many teams that aren’t capable playoff teams. The majority, if not all, can beat you on any given night. It’s the same approach. It’s not like we’re over here throwing a party because we got moved into this district. It’s going to be a challenge. You’re traveling a difficult road, and that’s what makes it so fun. If you come out of there, you’ve done something.”

The schedule for the next two years is as notable for who is not on it, as who is. Madison Central and Clinton remained in Region 2-6A while Warren Central was moved out, and they were not able to find compatible playing dates with WC. That means the series with two of the Vikings’ biggest rivals will go on hiatus for at least the next two seasons.

Warren Central and Clinton played twice in 2020, in the regular season and again the second round of the Class 6A playoffs. Clinton won both of them. Seven of the last 11 meetings between the Vikings and Arrows were decided by seven points or less.

Morgan said several different approaches were attempted to continue both rivalry series, including scheduling them in the Red Carpet Bowl, but in the end the few open dates that each team had available simply didn’t line up.

Adding to the difficulty is that the season will start one week later than normal in 2021, which means teams only have 11 playing dates instead of the usual 12. Warren Central will play three non-region games and take an open date in Week 4, on Sept. 17.

“Their (Madison Central and Clinton) schedule pretty much stayed intact. They’re playing the Metro area teams. We just couldn’t make it work to where we could do that. We definitely tried to make it work, and for whatever reason couldn’t get it done,” Morgan said. “We hate to not play those games, but with the closing of that for a little while at least we’ll have new opportunities in front of us. It’s going to be weird. We’ve got a bunch of history there.”

While those series are going on ice, Warren Central will see its share of familiar faces. It will travel to play Brandon on Oct. 1 in a Region 3-6A game, after having played the Bulldogs in non-region games the past two seasons.

WC will host Pearl on Oct. 15 to continue a long-running rivalry series that dates back to the Little Dixie Conference days of the 1970s. Northwest Rankin visits on Oct. 8 in the renewal of an old Region 2-6A rivalry that went on hiatus when the Cougars switched regions in 2018.

Other opponents will be a bit fresher. Warren Central will see Oak Grove, Petal (Oct. 29) and Terry (Oct. 22) for only the second time ever, with the other meetings coming in 2016, 1980 and 2014, respectively. The previous Oak Grove and Terry games were both in the Red Carpet Bowl.

Warren Central will finish the regular season on the road on Nov. 5, by playing Meridian for the first time since 2006.

“Any time something is new, by nature you get excited about it. There’s so much to be said for tradition and keeping things the same, but there’s also something to be said for new and different, and first experiences, and that kind of stuff,” Morgan said. “We’re in this district and we’re going to have fun and a great approach doing it. This will be new for all of our players and a lot of our coaches, including myself. We’re going to look at it as a new challenge and a different challenge. It’s exciting.”

This is part of a series recapping Warren County’s top sports stories of 2020. This story was originally published on... read more