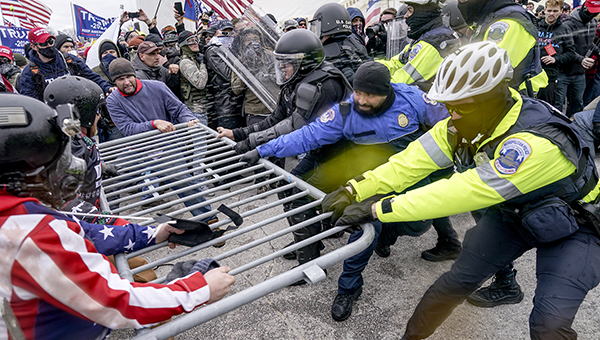 Rioters try to break through a police barrier Wednesday at the Capitol in Washington as Congress attempted to affirm President-elect Joe Biden's victory. (AP Photo/John Minchillo)

Wynne Campbell had become somewhat accustomed to all the protesting in Washington, D.C. these past few months.

But the former Vicksburg resident said as she passed the U.S. Capitol while out on a run Wednesday, she noticed there was something different about that day’s protest.

“It was kind of like a weird transient energy where the last few protests like this have been relatively peaceful — inconvenient for people that work in the area, but peaceful,” Campbell said.

Hundreds of Trump supporters stormed the U.S. Capitol on Wednesday, bypassing security and bringing to a halt the proceedings to certify Joe Biden’s victory in the presidential election.

Campbell, who is a financial consultant for Crowe and has lived in D.C. for about six years, said she saw the protestors but had no idea it would escalate the way that it did.

But once mayhem broke out, she said she and others in the area scrambled to get food for the week.

Campbell does not live in a high crime area, she said, “But when something like this happens police get localized to other areas, so we actually feel a little unsafe outside.”

With the protests this summer, Campbell said the CVS near her home was broken into four or five times and people were breaking windows, “because they could.”

Campbell is hoping that will not happen after Wednesday’s protest but she is preparing nevertheless.

“(Protests) really shut the city down,” she said.

Hours after the protest escalated, President Donald Trump in a video asked the protesters to go home. Unfortunately, Campbell was not confident his request worked.

“I think it was too little, too late, and at that point, the riot police were already clearing them out,” she said.

In past protests, Campbell said it has taken a couple of days for things to get back to normal because of damage that was caused. But she is hoping since few of these protesters were from Washington, D.C., or the D.C. area, they will leave soon.

“If they are not here it might be easier to transition back into normal life, but it’s hard to say without seeing what happens,” Campbell said.

Campbell said she did not feel fearful Wednesday, but is fatigued from all the upheaval.

“It’s kind of hard putting your life on hold for a few days at a time — you know every couple of weeks,” she said.

Campbell, whose office is near the Black Lives Matter Plaza where much of the protesting has occurred, said, “I appreciate being at the center of all this. It gives you a firsthand experience of history, but at this point, I don’t think anyone is getting any kind of positive benefit from these types of demonstrations — inciting violence. I just hope people learn that it does not lead to anything positive.

“Not meaning the peaceful demonstrations,” she said, “but what happens when the sun goes down.”