Ugly brawl, not winning streak, will be Mississippi State’s last image of 2020 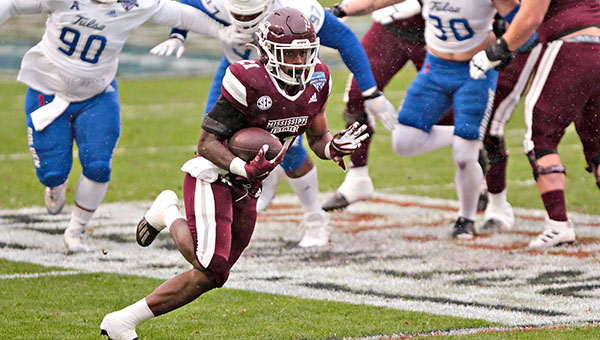 Mississippi State running back Jo’quavious Marks (21) carries the football in the Armed Forces Bowl against Tulsa. Marks had 102 total yards and a touchdown in the Bulldogs’ 28-26 victory. (Walter Frazier/For The Vicksburg Post)

What should have been a positive finish to a difficult football season for Mississippi State quickly devolved into a chaotic nightmare.

A couple of pushes and shoves escalated to punches and kicks, and then an all-out brawl.
Mississippi State’s 28-26 victory over Tulsa in the Armed Forces Bowl on New Year’s Eve was all but forgotten, replaced by the ugly fight as the final lingering memory of the 2020 season.

“It didn’t mar anything we did out there whatsoever. It is done,” Mississippi State head coach Mike Leach said after the game. “The root of it is dumb no matter what the root of it was. The continuation of it was dumb. I would have it solidly in the category of dumb. Where the dumb started I am not entirely sure.”

Leach has not met with the media since the bowl game, nor has he issued any additional comments on the brawl. Mississippi State athletic director John Cohen did the following day, however, and called it “inexcusable.”

“No matter what led to the situation, fighting is inexcusable and does not represent Mississippi State University’s core values,” Cohen said in a statement issued on New Year’s Day. “Our administration and Coach Leach are working diligently with the SEC office to review yesterday’s events and will address the situation in an appropriate matter.”

Whether the discipline might include dismissing players from the roster, suspensions, or other internal punishments is unclear.

What does seem clear is that both sides accused each other of taking cheap shots and late hits, and festering bad feelings from a pregame confrontation between the teams eventually blew up when it was all over.

In a video posted from Mississippi State’s locker room, wide receiver Malik Heath joked about kicking a Tulsa player — safety Tieneal Martin — in the facemask. The kick came after Martin had thrown punches at several Mississippi State players and was tackled along the sideline by another.

Martin got back to his feet and ran down the field. Eventually Heath, who had run away from a moving mass of players, spotted Martin and threw another punch.

The Heath-Martin confrontation was one of many smaller fights that broke out among the larger melee. The brawl started near midfield and wound up near the goal line.

During the brawl, Mississippi State’s De’Monte Russell, in street clothes beneath his jersey, ripped the helmet off Tulsa’s Martin and landed a punch to Martin’s head.

“Coach Leach addressed us as a team after the game, and we will handle that in-house,” Mississippi State defensive lineman Kobe Jones said. “It was emotional and a mishap. We have to be better and more disciplined.”

Leach said afterward that he would need to review video of the incident before assessing it.

“All of a sudden there was a mosh pit out there. During warmups there was a group of their guys that circled around our warmup and were talking. I really don’t know. I haven’t seen enough film to let us off the hook on this thing by any stretch,” Leach said. “We haven’t had any trouble of that sort of thing all season. We haven’t had any trouble with that. I don’t know if they had or not and I don’t know where the basis of that was.”

Another thing that was clear was the brawl stole the spotlight from an impressive Mississippi State victory and a strong finish to an otherwise down seaosn.

The Bulldogs (4-7) closed the year with back-to-back wins, on the back of a stout defense and a new commitment to the running game.

“They were important. We were feast or famine on both sides of the ball,” Leach said. “We either got turnovers or got ran through. We either marched down the field or went three and out.”

More noteworthy was the Bulldogs’ running game. After nearly abandoning it for most of the season, they kept it on the ground 30 times and finished with more than 100 yards as a team for the second game in a row.

Mississippi State only had 20 or more rushing attempts twice in its first nine games, and not since a Week 4 loss to Texas A&M.

In the regular-season finale against Missouri, Mississippi State ran it 28 times for 151 yards. Against Tulsa, it had 30 attempts for 123 yards as Jo’quavious Marks led the team with 72 yards and one TD on 11 carries.

Leach attributed some of the commitment to the run to the weather. It was 37 degrees and raining in Fort Worth for the bowl game, and the Missouri game was also played in the rain.

“It was a crappy day. We have improved on that aspect. We are doing a better job in run blocking and our backs carrying the ball. We had some mistakes there, but there were definitely some positives,” Leach said.