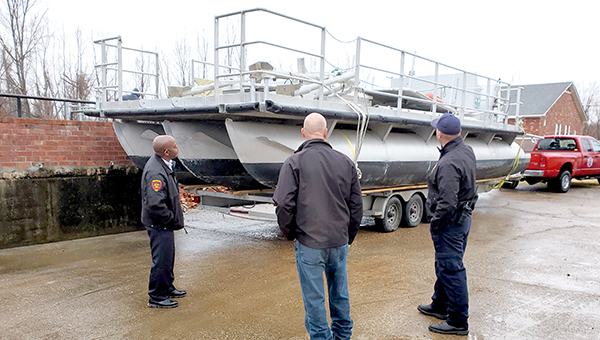 The latest addition to the Vicksburg Fire Department’s equipment inventory was delivered Thursday afternoon when fire Chief Craig Danczyk pulled the department’s pontoon service boat through the gates of the department’s Training Center.

“Phase 1 is complete; we got it here,” he said after parking the trailer carrying the three-pontoon boat. “Now comes Phase 2; developing a plan for it.”

The Board of Mayor and Aldermen accepted the donation of the boat on Dec. 23 from the Mississippi Department of Environmental Quality. Thursday morning, Danczyk drove to Bay St. Louis to pick it up.

Charles Thompson of Bovina, environmental administrator 2 for DEQ who helped Danczyk get the boat to Vicksburg, was responsible for its donation to the city.

DEQ, he said bought several large pontoon boats during the BP oil spill to use as oil skimming boats.

“After, they were used as research boats to take water samples and monitor the coast,” he said. “They were getting to be more than we could handle, and we had already given some to other organizations. I thought the fire department could use it as a harbor boat.”

“I’m excited,” Danczyk said. “I believe it has a place in Vicksburg.”

While there is no deadline to have the boat for service, Danczyk believes it can serve several functions. Some of those include serving as a div platform for the department’s dive team or, with the return of the cruise boats to the city, mounting a fire pump on the boat.

Having a pump on the boat, he said, could help improve the city’s fire rating in the future.

“We have a lot of options,” Danczyk said. “This is going to be an asset to our fleet.”