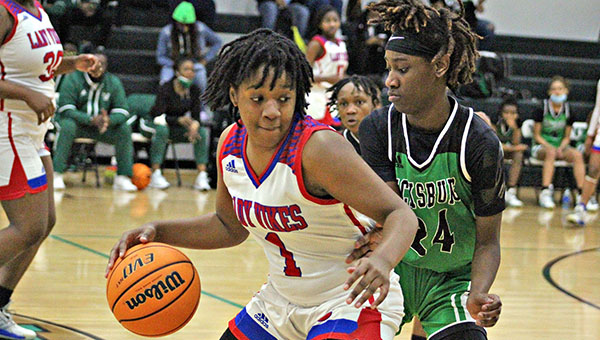 Leading up to their third game in five days, and second in 15 hours, Vicksburg High girls’ basketball coach Troy Stewart had some concerns about how his team would handle the accumulated fatigue of a busy week.

It took about a quarter to see the answer was “very well.”

The Missy Gators held Warren Central to one field goal in the first quarter, and got contributions from the entire roster to earn an easy 66-29 victory Saturday.

Ten of Vicksburg’s 11 players scored, and eight of those had at least four points. Destini Sims and Sha’Kora Knight led the team with 11 points apiece, Layla Carter scored 10 and Kiarra James had nine.

“Great way to wrap up the week. I thought we persevered through those three games, we got three wins, and I’m very proud of them,” Stewart said. “I was trying to keep the girls’ legs fresh. I played the first unit extended minutes last night trying to get a win, but I was more stressing getting my seniors an opportunity today because it was the last time they’ll play Warren Central.”

Vicksburg (11-5) went 3-0 during its busy week, with two of those wins coming against Region 4-5A opponents. The Missy Gators, who reached the MHSAA Class 5A semifinals last season, have won eight of their last nine overall and appear to be trending upward as the region schedule heats up. Their next game is Jan. 15, at home against Callaway.

“We’ve got to stay focused and keep this up, because they’re thinking about taking the district tournament away. So you’re seeded by your district games, and they’re more important this year than they have been,” Stewart said. “We want to make sure we’re locked in and focused, and taking care of business.”

They certainly were, and certainly did, on Saturday.

After a scoreless couple of minutes at the start of the game, the Missy Gators built a 13-2 lead by the end of the first quarter and stretched it to 27-9 by halftime.
Warren Central then went just over four minutes without scoring at the start of the third quarter and the deficit spiraled out of control. Kayleigh Karel hit a 3-pointer with 3:53 remaining to break the drought, but it was the Lady Vikes’ only field goal of the period. They were outscored 23-4, and trailed 50-13 after Destini Sims dropped in a layup at the buzzer.

“I think defensively we were locked in all day. That really helps us. Even if we don’t do a lot of scoring, it makes it easier for us to maintain a game. If we score 10 points and you don’t score but four, we’ve done our job,” Stewart said.

On the other side, Warren Central coach Darein Hilliard was not as enthusiastic about his team’s performance. Karel finished with 14 points — nine of them in the third quarter — and Ta’Miya Sims scored eight, but the Lady Vikes (3-12) were never in the game.

“We have played good competition over the Christmas break, we have played games, and for them to come out and play the way they played today is totally unacceptable,” Hilliard said. “It starts with me. We didn’t come to play. We let Vicksburg do whatever they wanted to do. We didn’t put up a fight. As much as we shoot, for us to only put up 30 points … excuses are over. They’re not young anymore. We’re just not getting it done.”