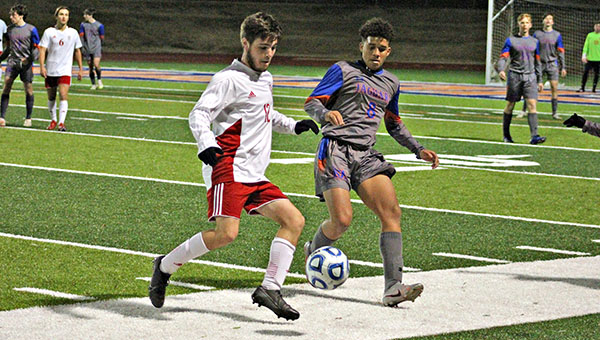 MADISON — Warren Central started the week with a top 10 ranking among Mississippi’s boys’ soccer teams and a clear path to the Region 4-6A championship that it fully controlled.

It finished the week battered, bruised, with a somewhat clear but uncertain path to the region title, and wondering where things went sideways so quickly.

Terron McIntyre scored one goal and assisted on two more, and Madison Central scored off of three corner kicks to beat Warren Central 5-0 on Friday night.

“We didn’t have the intensity that we should have had. I noticed that at the beginning of the game,” Warren Central coach Greg Head said. “But the thing is, we made simple mistakes on set plays on corner kicks. We’ve never been scored on corner kicks like that, and they scored three or four off corners. We’ve got to learn to pressure better. We just weren’t ready for that.”

It was Warren Central’s second loss this week to a region opponent, which leaves the Vikings (13-4-1, 2-2 Region 4-6A) in a precarious position. They can still make the playoffs — and even win the region title — but must beat Murrah on Tuesday and Madison Central (5-2-1, 2-1) next Friday. Both games will be played at Sports Force Parks on the Mississippi in Vicksburg.

Two losses would put the Vikings out of the playoffs, and a split would likely send the playoff race into a web of tiebreakers whose outcome is uncertain.

“We’re still in it, but we’ve got to beat (Madison). We’ve got to beat Murrah. If we beat them and Murrah, we’ll win the district,” Head said. “It’s going to be tight because they beat us by five goals. But we’re in a position to either win it or not even make the playoffs. It depends on what we do these last two games.”

Head felt confident that, whatever happens next week, the Vikings won’t let the back-to-back losses drag them down.

“They’ve got the mentality that they want to win. They’ll come back and work hard because they want to win. They know we’re close. We’re right there. They’ve just got to push it over the edge,” Head said. “I’m proud of the guys. They worked their butt off, and I’ve got to give them credit for that.”

Warren Central never really got into gear against Madison Central.

Duncan Cavett knocked in McIntyre’s corner kick in the seventh minute for the game’s first goal, and then Dillan Smith scored on a nearly identical play in the 23rd minute to make it 2-0.

Warren Central picked up its intensity for the rest of the first half and managed two shots on goal, but did not score. On the other side of halftime, McIntyre sent a shot past the keeper for a goal of his own in the 45th minute and Regal Perry converted after a scrum in the box in the 48th to make it 4-0.

Benton Taylor finished the scoring with a goal in the 67th minute.

“Once they got two goals ahead, I think it deflated some of our guys and we just didn’t have the intensity after that,” Head said. “We came back and started playing with some intensity, and then another stupid corner kick goes in and it’s just like, ‘We can’t do anything.’ Intensity was the main thing.”

While Warren Central’s boys’ team is still trying to make the playoffs, its girls’ team might not play again this season because of COVID-19 issues.

Head said two players on the team tested positive for the virus following a game at Murrah last weekend, which forced the rest of the players into quarantine for 14 days. The Lady Vikes postponed region games against Clinton and Madison Central this week, and will likely forfeit two more next week against Murrah and Madison Central.

The Lady Vikes’ quarantine is scheduled to end Jan. 23, which is also the final day of the regular season for the MHSAA’s soccer teams. Head was hopeful they’d be able to reschedule one of the postponed games then, but was not certain if it would be allowed under the MHSAA’s COVID-19 guidelines.

HATTIESBURG — Freshman Jaron Pierre, Jr. produced his second double-double of the season, with 24 points and 10 rebounds, while... read more