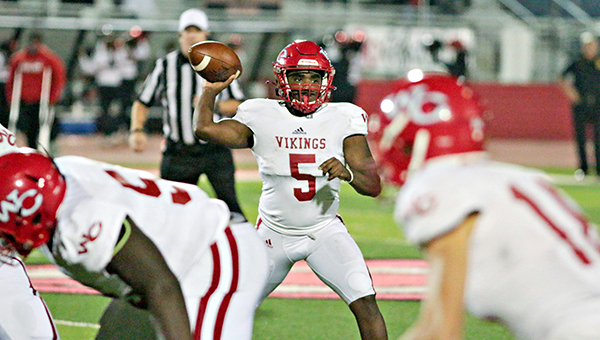 Warren Central quarterback Kentrick Thompson (5) throws a pass during a playoff game against Clinton. Thompson was one of six Warren Central players selected to the All-Region 2-6A first team. (Walter Frazier/For The Vicksburg Post)

Warren Central’s run to the second round of the 2020 MHSAA Class 6A football playoffs netted one last round of accolades as six players were selected to the All-Region 2-6A first team in voting by the league’s coaches.

The two Bells — no relation to each other — and Smith were previously selected to the Mississippi Association of Coaches Class 6A All-State team as well, and Smith was The Vicksburg Post’s Defensive Player of the Year for Warren County.

Tevin Bell, a senior cornerback, led the Vikings with five interceptions. Smith totaled 53 tackles, with 12 for loss and eight sacks. He also had two interceptions that he returned for touchdowns.

Jaylin Thompson, another senior cornerback, did not have an interception but did lead the team with 10 pass defenses. He also had 51 tackles.

Kentrick Thompson, Jaylin’s brother, moved from running back to quarterback in 2020 and made the All-Region team as a quarterback/athlete. He passed for 835 yards and five touchdowns, and ran for a team-high 546 yards and seven TDs.

Griffin made four field goals and was 16-for-17 on PATs. He also had 16 touchbacks on 26 kickoffs, and averaged 36.1 yards on 21 punts. Griffin signed with Southern University during the early signing period in December and played in the Bernard Blackwell Mississippi All-Star Game.

Quarterbacks Caleb Miller of Clinton and Luke Altmyer of Starkville shared the Offensive Player of the Year award.