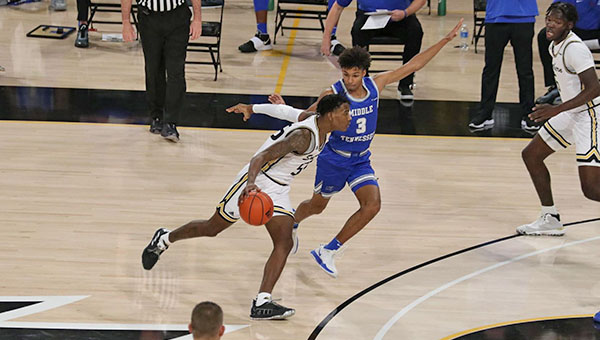 HATTIESBURG — Freshman Jaron Pierre, Jr. produced his second double-double of the season, with 24 points and 10 rebounds, while three other Golden Eagles scored 12 points in an 84-54 win over Middle Tennessee on Friday night to open the two-game series.
The two teams meet again at 4 p.m. Saturday in Reed Green Coliseum.
“I thought our guys prepared well this week,” Southern Miss coach Jay Ladner said. “I thought when we left our gameday walk-through that I felt confident in our abilities, but maybe not necessarily the margin. Our guys were locked in and the staff prepared them for tonight. But tomorrow is a different story.”
Pierre went 9-for-11 from the field, including 6-for-8 from 3-point range. He was one point shy of a career-high, while it was also his second game connecting six times from long range. Denijay Harris’ dozen points were his own career-high, while Tyler Stevenson and Artur Konontsuk added the same as well.
“It was great to see Jaron Pierre bounce back after not playing his best Saturday at UAB,” Ladner said. “He’s an 18-year-old true freshman. His teammates did a great job at finding him. So many of his shots were off assists. Denijay Harris had a career-high in points, and Tae (Hardy) and Tyler (Stevenson) were solid as usual. Artur Konontsuk also did well off the bench, and LaDavius Draine has always been a team guy as defensive pressure builds (on his shooting ability).”
Southern Miss went on a 12-2 run over the final four minutes to lead 38-22 at the break, its largest lead of the season. Konontsuk’s corner 3-pointer at the buzzer put on the finishing touch.
A 29-10 run midway through the second half moved the lead to 82-46 with 2:59 remaining. The Blue Raiders shot just 29 percent in each half, while the Golden Eagles were 50 percent in both.
Southern Miss also won the points-in-the-paint battle, 46-18, and had an 18-3 edge in points off turnovers.