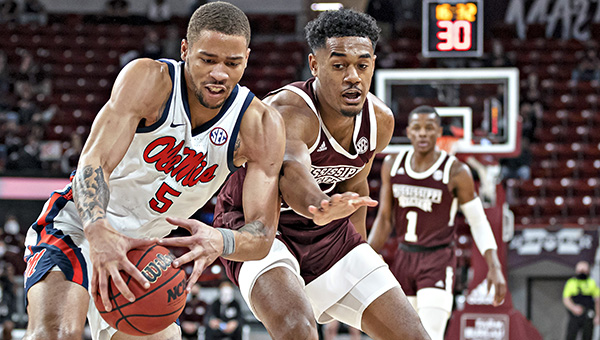 Devontae Shuler scored 22 points and Ole Miss put forth its best defensive effort against a Southeastern Conference opponent in 17 years as it beat archrival Mississippi State 64-46 on Tuesday.

“It’s always good to win,” Shuler said. “I felt like we went through a stretch of giving up games from the last couple minutes of the game. Us coming out against our rivals and beating them just put us back in the win column. Now, we’re back to the conversation.”

Shuler finished 8-of-13 shooting with three 3-pointers and three of the Rebels’ 10 steals. Jarkel Joiner added 12 points for Ole Miss .

Defensively, Ole Miss forced the Bulldogs to shoot 35 percent (18-of-52) from the floor and forced 12 turnovers. Ten of those were steals.

The 46 points were the fewest Ole Miss has allowed against an SEC opponent since beating Arkansas 55-45 on Feb. 6, 2004.

“I thought they did a great job pressuring us and being really physical with our ball handlers,” Mississippi State coach Ben Howland said. “We knew they were going to hard hedge ball screens. That seemed to really give us issues today, something that we’ve seen before. We have to do a better job of handling that.”

Ole Miss took the lead for good midway through the first half and led 29-21 at the break. The Bulldogs pulled to 42-38 with 12:07 to play, and then the Rebels answered with an 18-4 run, capped by Shuler’s jumper, and led 60-42 with about three minutes left.

“Our team has been close,” Ole Miss coach Kermit Davis said. “We had a great two days of preparation for this game. The key was rebounding,
and a great and experienced guard play from Devontae. K.J. Buffen was terrific with a good
play off the bench. It was a really good team win and a really important game.”

Yakia Burns had achieving a triple-double on her list of goals this season. She finally did it Tuesday night —... read more