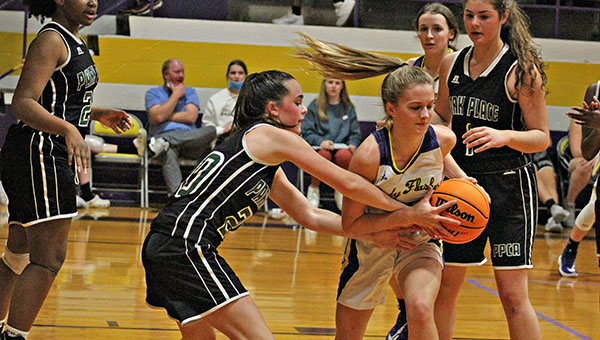 The St. Aloysius Lady Flashes used some tight defense and a balanced scoring effort to find a win near the end of a long and tiring week.

Taylor Chewning scored eight of her game-high 13 points in the second half as the Lady Flashes beat Park Place Christian Academy 37-22 on Friday night.

Chewning was joined in double figures by Elizabeth Theriot with 10 points and Kendyl Rice with 10. Ariel Knott led Park Place with 11 points, but the Lady Crusaders struggled to score from anywhere in the second half.

After trailing just 18-17 at halftime, Park Place managed one field goal — a basket by Kimora Coleman in the third quarter — and five total points in the second half.

The strong second-half effort allowed St. Al to pull away, complete the season sweep of Park Place, and earn a win in the third of four games it will play this week. The Lady Flashes host Washington School Saturday at 3 p.m. to finish the week.

Zyer Smith and Tiarra Sims added 13 points apiece for PCA, which lost by 21 points in the first meeting against Greenville Christian this season.

Vicksburg 64, Ridgeland 45
The Vicksburg Missy Gators used a 14-2 run in the first quarter to build a double-digit lead they never relinquished, and remained undefeated in MHSAA Region 4-5A by beating Ridgeland.

Twenty-one of Madison Central’s 26 points in the first half came on 3-pointers. Caleb Kent hit two in the game and finished with 13 points.

Despite the early barrage, Warren Central only trailed 26-23 at halftime. It then scored a total of 14 points in the second half to allow the Jaguars to pull away.

Vicksburg 72, Ridgeland 35
Taylon Smith made four 3-pointers and scored all of his game-high 22 points in the second half as the Vicksburg Gators doubled up Ridgeland in a key MHSAA Region 4-5A game on Friday.

Anthony Lumpkin scored 17 points for the Gators, while Sean Hardy and Jaden Williams had 10 apiece. Vicksburg raced to a 31-11 lead at halftime and, with Smith making three 3-pointers, extended it to a 30-point margin by the end of the third quarter.

Vicksburg (11-6, 3-2) swept the season series from Ridgeland, ensuring it will finish no worse than third in Region 4-5A and avoid a matchup with perennial power Callaway in the first round of the region tournament next month.