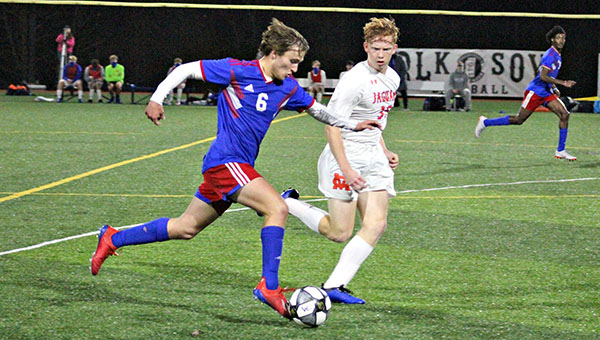 In the final moments of Friday’s game against Madison Central, Tony King shook free from the defense and unleashed a rocket of a shot toward the upper right corner of the net.

It ticked off the hands of keeper Landon Parrow and the crossbar, and served as one final symbol of Warren Central’s season.

King’s shot was Warren Central’s last in a final flurry that nearly led to a miraculous comeback, but instead came up agonizingly short. John Hrivnak scored two goals for Madison Central (8-4-2, 4-2 MHSAA Region 4-6A), which clinched a playoff berth with its 3-2 win over the Vikings at Sports Force Parks.

Warren Central finished with a 14-5-1 record — the seventh year in a row it has posted a double-digit win total — and spent most of the season ranked among the top 10 boys’ soccer teams in Mississippi. It still, however, missed the playoffs for the second year in a row.

“It sucks, especially this year because we had such a good chance coming into it and then kind of blew it with that one Clinton game. This was our game to fix it and get it back together,” King said. “It hurts losing it like this, but we fought to the end. I feel like there were some calls that could have been fixed and the game could have came out different, but I’m proud of everybody and how we played.”

Warren Central (3-3 in Region 4-6A) could still have earned a berth if Murrah had beaten Clinton on Saturday afternoon and a series of tiebreakers worked out in its favor. Murrah beat Clinton 2-1 in overtime two weeks ago, but could not spring a second upset. Jarrean Hoskins and Carson Barefoot each scored three goals and Clinton routed the Mustangs 7-0.

Warren Central’s promising season was derailed by a late-season slump in which it lost three of its last four games — two to Madison Central and one to Clinton. Two of the losses, including Friday’s, were at home by one goal.

In fact, three of Warren Central’s five losses this season were by one goal. Playing in a stacked region with two other Top 10 teams meant one of them had to miss the playoffs, however, and for the second year in a row it was the Vikings.

Indeed they did, and they came within a whisker of doing it.

Madison Central built a 3-1 lead on the two goals by Hrivnak — one a corner kick that he curled inside the post in the first half, the other on a penalty kick early in the second — and another by Jordan Jones in the first half. Josh Griffin had Warren Central’s first goal.

Just when it looked like Madison Central had the game in hand, however, Brandon Gilliam scored with about four minutes to go to pull the Vikings to within 3-2. They spent the last few minutes of the game on the attack and generated several chances, including King’s shot that caught the crossbar before sailing out of bounds.

“It felt like we had all the time in the world to score. It felt like a sigh of relief because it was only one. We just felt like we could do it,” King said of the reaction to Gilliam’s goal.

Unfortunately for the Vikings, it was not meant to be. King’s chance was their last, best one, and Madison Central was able to survive the frantic final minutes to win. The Vikings had to settle for knowing they gave it everything they had, throwing a scare into the Jaguars after losing 5-0 to them a week earlier, and being the best team in Class 6A not in the playoffs.

“I’m so proud of these guys. They’re probably one of the best teams we’ve had, skill-wise,” Head said. “The fact that we don’t make it to the playoffs doesn’t mean anything because we’ve played and hung with some of the best teams in the state and we were even with everybody. It could have gone either way tonight, just like it has in most of our games.”

The St. Aloysius Lady Flashes used some tight defense and a balanced scoring effort to find a win near the... read more