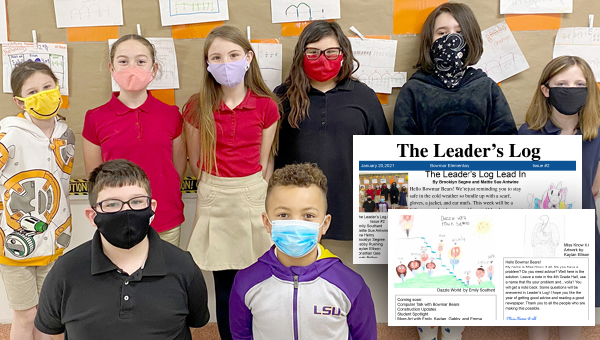 Extra! Extra! Read all about it!

Three Bowmar Avenue Elementary students had the idea to start a school newspaper and, with a little help from a teacher and a few of their friends, the first digital issue of “ The Leader’s Log” was published in December and a second has followed in January.

Inspired by the movie “Diary of a Wimpy Kid,” fourth-grade students Emily Southard, Brooklyn Segree and Ava Henry decided they wanted to start a newspaper.

“Me and my friends watched a movie about a newspaper and the idea just flew into our minds,” Emily said.

During their recess, Ava said she and her friends “brainstormed a few ideas” as to what they wanted to include in their newspaper. With the help of one of their teachers, Neely Ming, they then took their idea to school principal Jason Bennett.

“We made an appointment with Mr. Bennett because you know, he is very busy,” Brooklyn said.

Upon hearing the girls’ idea, Brooklyn said, Bennett gave them the green light to move forward with the newspaper, with Ming guiding the girls’ effort.

Eventually, the students involved with the newspaper, Ming said, will also manage PowerPoint, which is the program used for the digital newspaper.

“We have a drawing column, a Miss Know-It-All (which is like an advice column), a sports column, comics and comic jokes,” Emily said.

There is also a teacher feature, Ava said.

For the main news section of the newspaper, Ava said, those in charge of writing will acquire their information from Internet research and “reliable sources.” In one of the editions, a main news story had been done about winter safety tips and COVID-19 safety tips.

The sports column is covered by some of the young male reporters, who will gather scores from a variety of sports, Brooklyn said, and in the issue that was soon to be published, she said they had done an interview with a sports figure.

“It’s very exciting,” Brooklyn said, “Our sports boys; they got an amazing interview with someone very special.”

At the time of the interview, the edition had not been published and when asked if she would share the name of the “special” person interviewed with a fellow reporter, Brooklyn said, “I can’t say because it is a big surprise and the boys don’t want me telling anyone because they want to keep it in the school newspaper’s family, but I will say it is a special sports star.”

“Instead of playing video games we can draw for the newspaper or write an article and at recess, we have meetings to go over assignments,” she said, adding anyone that is interested in becoming a staff member for The Leader’s Log has the opportunity.

“Me and Miss Ming get together with that person and interview them,” Emily said.

From its inception, the staff at The Leader’s Log continues to grow, Emily said, as has the newspaper’s popularity.

When Ming posted the The Leader’s Log on Google classroom, Brooklyn said it was a hit with the distance learners.

“They were like ‘wow, this is so good,’ and they said that they loved it and that was very exciting,” Brooklyn said. “Our first reactions were very cool.”

Starting a newspaper is no easy feat. It takes time and dedication, but Emily, Brooklyn and Ava said they are having a good time with their project.

“We have a lot of fun with it and we get to be creative, and I get to spend a lot of time with my friends,” Brooklyn said.

Like Brooklyn, Ava and Emily said they, too, liked the creative aspect of working on a newspaper.

“I like that I am able to be creative. I can brainstorm things and we are able to pick our own topics,” Ava said.

“I like that I get to draw,” Emily said.

“And sometimes I get to skip classes for meetings,” she said, laughingly — one of the perks, one would say, of starting a newspaper.