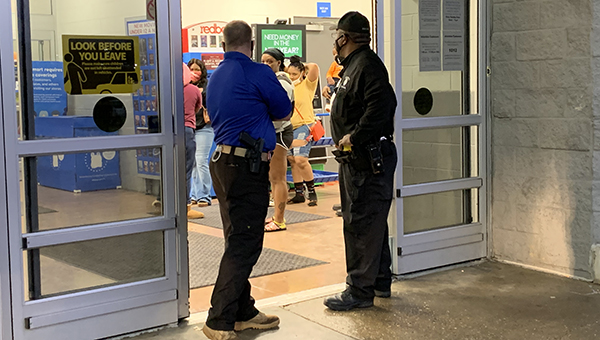 Security and personnel with the Vicksburg Police Department block a door at the Walmart at Vicksburg after an incident Monday evening. (Terri Cowart Frazier/The Vicksburg Post)

An apparent confrontation between an individual and a group of people inside Walmart resulted in multiple calls to Vicksburg police about an active shooter in the store with shots fired.

The incident forced store officials to evacuate the building.

The incident occurred at about 5:08 p.m. Vicksburg Police Department spokesman Capt. Mike Bryant said officers responding to the call arrived about 5:11 p.m. and determined after an investigation that no shots were fired although several witnesses to the incident said some of the people involved were armed.

Bryant said officers questioned a man who claimed to be a victim in the incident, adding the other group left the store before officers arrived.

Officers did not charge the man, Bryant said, but Walmart officials were charging him with disturbance of a business and carrying a concealed weapon in the store. Both charges are misdemeanors. The store later reopened.

“The incident remains under investigation; officers are going to review the store video to determine what happened and to try and identify the members of the other group,” Bryant said.