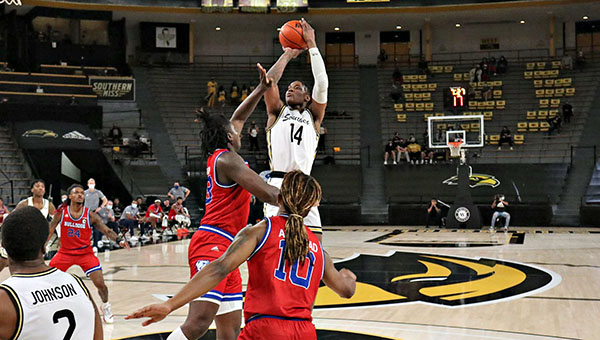 HATTIESBURG — A big run in the second half Thursday night proved costly for Southern Miss in the first half of its series with Louisiana Tech.

Louisiana Tech went on a 14-0 run midway through the second half, and went on to beat Southern Miss 76-63 at Reed Green Coliseum.

The two teams will rematch Saturday at 2 p.m. in Ruston.

“It was a perplexing second half,” Southern Miss coach Jay Ladner said. “I thought we had played well. Whatever I said or didn’t say at the half was wrong. I take full responsibility for it. We just couldn’t get it going. A few guys struggled. Louisiana Tech really has no weaknesses, and I like their team. I thought our plan was good, and for the most part we were good at executing it.”

The first half never saw more than four points’ separation, but Southern Miss (7-9, 3-6) found a spark when Tyler Stevenson lobbed a layup alley-oop to DeAndre Pinckney with 37 seconds left. On the ensuing inbounds pass, the Bulldogs rolled it into an empty spot of the floor and Tae Hardy scooped it and laid it in.

The momentum was short-lived as Tech’s Amorie Archibald drained a 3-pointer in the waning seconds to tie it at 37.

Louisiana Tech opened a six-point lead in the second half before going on a 14-0 run over four minutes that gave it a 70-50 advantage with 7:10 left in the game. Six different players scored during the run.

“We got 11 stops in a row and that was so key,” Louisiana Tech coach Eric Konkol said. “Our offense after a stop is so much better than after a score. When we get stops, we want to be able to take advantage of it. We got into a rhythm defensively and I thought the guys did a really nice job of sharing the basketball and finding good looks on offense.”

Stevenson, Hardy and Pinckney led Southern Miss with 15 points apiece. It was Hardy’s first action after missing the last two games, both at UTSA, with an injury.

Southern Miss only shot 28.1 percent (9-for-32) from the field in the second half. It missed 10 consecutive shots during Louisiana Tech’s decisive run and lost its third consecutive game.

“I thought we had times where we settled for perimeter shots, whereas when we were patient, we got good looks and high-percentage shots,” Ladner said. “We kind of got away from that and settled on some jumpers. There was a good stretch where the ball never got into the paint, and at times we compounded it by not playing with grit and determination on the defensive end.”