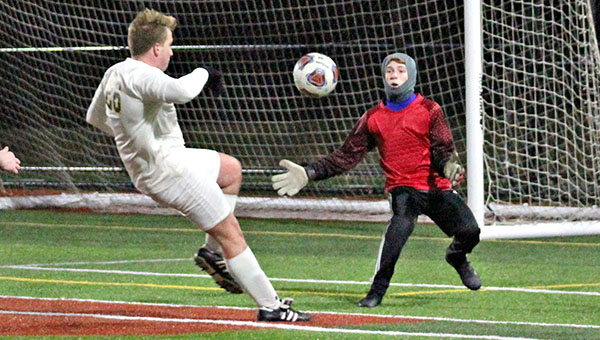 St. Aloysius soccer coach Jay Madison did not mince words in assessing the quality of play between his team and Pillow Academy on Thursday.

“It wasn’t beautiful soccer,” he said with a chuckle.

Maybe not, but the defensive breakdowns and miscues that made purists cringe sure made for an exciting game.

Pillow Academy scored two goals in a two-minute span of overtime — after St. Al had done the same thing late in regulation — and then held on down the stretch to secure a wild 5-4 victory at Sports Force Parks.

The game featured four lead changes, and each team came from behind to take the lead at least once.

“It just falls that way sometimes,” Madison said. “We’ve got some injuries with older guys that would help us, so our younger guys had to step up and in some cases they struggled. But they’re learning and that’s part of it.”

After St. Al scored the first goal of the game early on, Pillow (5-4, 3-0 MAIS Division II West) racked up three straight goals to eventually take a 3-1 in the 55th minute. St. Al, however, stole the momentum back with a lightning-quick pair of strikes.

Cooper Madison floated a shot over Pillow keeper George Sfeir in the 64th minute, and then in the 66th Sfeir couldn’t handle a high shot from John Ellis Montgomery and the ball fell into the net. The two quick goals tied the game at 3.

“What they take from that is that you’re not scared. It takes a little while to get in the game and get going, and then you realize, ‘Hey, maybe I’m a good player too,’” Jay Madison said. “That confidence builds and you have a little bit of success. We saw it when we came off the field at the end of the game going into overtime. I said we were playing our best soccer, and we really were.”

St. Al keeper Dalton Windham ensured the game remained tied through the end of regulation. He stopped two breakaway chances and broke up several other plays in the box in the final 15 minutes. Windham, an eighth-grader playing in place of injured starter Chase Tucker, finished with 14 saves.

“An eighth-grader had to step in for our junior goal keeper who had 12 saves the other night and you couldn’t ask for more from him,” Madison said.

The game went to overtime tied at 3, and in the 85th minute St. Al’s Reed Bourne launched a 30-yard free kick past Sfeir to break the deadlock. The Flashes’ defense could not hold the lead, however.

In stoppage time of the first 10-minute overtime period, a throw-in led to a scrum in front of St. Al’s net and Hunter Barry kicked the equalizer past Windham.

After the brief intermission between overtime periods, a defensive breakdown by St. Al gave Richard McQueen the ball at midfield and nothing but green turf between he and the keeper. McQueen dribbled all the way into the box, got the right angle for his shot, and sent it past Windham into the left side of the net to put Pillow back in front, 5-4, in the 92nd minute.

It was McQueen’s second goal of the game.

“The guy that normally marks (McQueen) was coming up to throw it, and we threw it to him and lost it. Then the ball gets played back and the defense gets out of sorts, and they made the best of it,” Madison said.

St. Al had a couple of scoring chances in the last eight minutes, but Sfeir made a pair of saves and Pillow was able to preserve the win.

It was the first district loss of the season for St. Al (6-3, 3-1) and thus not fatal to its playoff hopes. It will play Pillow again Monday in Greenwood and can still win the season series if it wins that game by two goals or more.

“Our district’s kind of crazy because everybody keeps beating everybody, except Pillow. It looks like it might come down to us and Bayou” for a playoff spot, Madison said. “But we’ve got a chance to go up there Monday and getting a win at Pillow. If we get a win at Pillow, that increases our chance of making the playoffs.”

Madison added that Thursday’s game was a good learning opportunity for his younger players, who helped lead the charge from a two-goal deficit to a potential victory when things seemed bleak.

“We’ve got a good team. We’ve just got a lot of young players. I had five or sixth eighth-graders out there,” Madison said. “They learn from it. Keep fighting, keep learning, keep working, and then at the end of the year, all of a sudden you make the playoffs and you try to piece it together from there.”