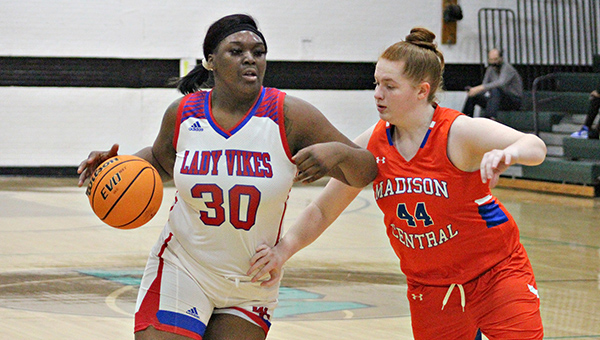 Defensively, the Warren Central Lady Vikes seem very capable of winning a game in the Region 4-6A tournament and advancing to the MHSAA Class 6A playoffs.

The Lady Vikes were held below 40 points for the fourth consecutive game on Friday when they lost 45-27 to Madison Central. It’s a dry spell that coach Darein Hilliard hopes is as simple to solve as taking — and making — a few easy shots, but also one that could be a concern when the region tournament begins Feb. 8.

“We’re trying to figure it out. We’re going to keep shooting. We’re going to keep doing the things we’ve been doing to try and maximize our capability as far as shooting the ball. We’ve got to figure out a way that we can make some baskets, and make some easier baskets, and get out in some transition and do some running,” Hilliard said. “I think it’s just a confidence factor. We have to get more confident in shooting the ball.”

Zy’kerri Segrest scored 10 of her team-high 12 points in the first half for Warren Central (5-15, 2-4 Region 4-6A) against Madison Central, and Calise Harvey added eight. The Lady Vikes went four minutes without a point at the start of the second half, however, and only scored five in the last four minutes of the game.

Madison Central, which didn’t exactly burn up the net either, was able to slowly extend a seven-point halftime lead throughout the second half. The final 18-point margin was the Lady Jaguars’ biggest lead of the game.

“We did get into some situations where we didn’t get shots here or shots there,” Hilliard said. “I usually don’t complain about officiating, but tonight I thought we had some no-calls that could have affected us getting some points from the free throw line.”

Warren Central and Madison Central will meet again in the first round of the region tournament. Hilliard said he likes his team’s chances.

“I’m just hoping they continue to buy in. We’ve got a shot,” he said