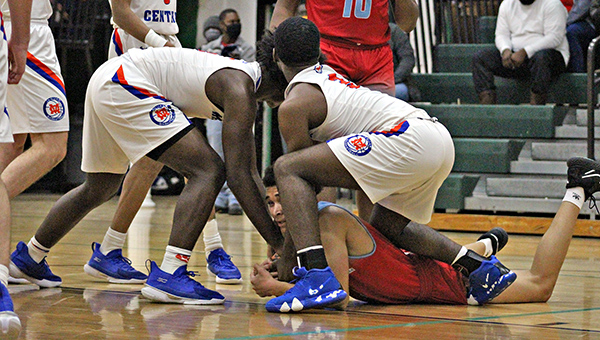 Warren Central’s Del’Jayvien Harried, bottom, protects the ball from two Madison Central defenders in the first half of Friday’s game. Harried scored 25 points for the Vikings, but it wasn’t enough as they lost 60-57. (Ernest Bowker/The Vicksburg Post)

With as difficult a season as its been, Warren Central’s boys’ basketball team certainly would prefer to have real victories instead of moral ones when the opportunity presents itself.

Still, there was plenty to be happy about on Friday night even if they added another loss to their total.

Madison Central held on to beat Warren Central 60-57 on Friday night after Del’Javien Harried’s game-tying layup rolled off the rim in the final seconds. It was Warren Central’s 15th loss in 17 games this season, but also its closest in six games against Region 4-6A opponents. Madison Central won by 22 points in the first meeting between the teams.

Coach Bruce Robinson was hopeful that it would help the Vikings build some momentum heading into the region tournament that begins Feb. 9 at Vicksburg Junior High.

“It’s huge for our confidence. Our team has been beat down, and beat down, and beat down by so many things that we cannot control, and for us to come out and play like we did, and for D.J. Harried to put us on his shoulders and play like he did, and give us a chance to win this ballgame, that’s huge,” Robinson said. “We needed this. I don’t know if we needed to win, but we needed a solid 32-minute performance.”

After a frantic third quarter in which they combined for 49 points, the Vikings and Jaguars slowed things down for an exciting finish in the fourth quarter. Madison Central held a 58-57 lead with two minutes to go, and added to it when Davis split a pair of free throws with 1:21 left.

Warren Central turned the ball over on its next possession, but got a second chance when Vic Harvey missed the front end of a one-and-one with 23 seconds remaining.

The Vikings called a timeout with 9.7 seconds to go, and then got the ball into the hands of their best player Harried. He drove down the middle of the lane and got a good look at the basket, but his layup rolled off the rim. Davis rebounded it, was fouled, and hit one of two free throws with four-tenths of a second left for the final 60-57 margin.

Robinson had nothing but praise for Harried’s performance. The senior scored 15 points in the second half, including a 3-pointer in the third quarter to cap a 9-0 run that tied the game at 36.

Robinson also was happy with the effort of some other players like W.L. Burks (nine points on three 3-pointers) and Taylor Mitchell (eight points).

“It was our two-man game and D.J. Harried really scored the ball well,” Robinson said. “W.L. Burks knocked down a couple of big 3s. Everybody we put out there really stepped up and contributed.”