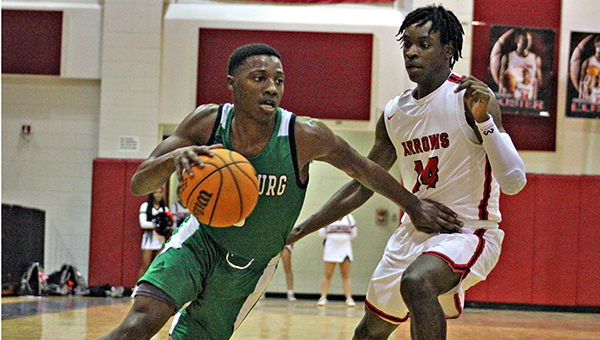 Gators hand No. 2 Clinton its first loss of the season

CLINTON — Keshawn Brown threw down four or five dunks Tuesday night. The last one, though, is the one he and his Vicksburg High teammates will remember for a very long time.

With time winding down in overtime, Brown drove into the lane, took a pass from Sean Hardy, and flushed a two-handed jam to give the Gators the lead over Clinton. A few moments later it stood up as the winning basket as Vicksburg handed the Arrows their first loss of the season, 60-57.

Clinton (15-1) is ranked No. 2 in Mississippi and No. 71 in the country by Maxpreps.com, and is a heavy favorite to win the MHSAA Class 6A championship.

“We knew they were undefeated, so we just wanted to put that one up there,” Brown said. “We’ve been talking about that since Saturday. Coach (Kelvin) Carter told us they’re a great team. They’re going to make big shots, they’re going to make runs, but just keep on playing and that’s what we did and we came out with the victory.”

Brown finished with 10 points — all in the second half and overtime — and eight rebounds. Hardy just missed a triple-double, finishing with 17 points, nine rebounds and eight assists, while Taylon Smith made five 3-pointers and scored 19 points for the Gators (13-6). 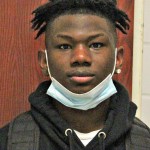 Micheal Bell scored 10 of his game-high 20 points in the fourth quarter for Clinton, and Kimani Hamilton added 12 points.

The two teams went toe-to-toe for 2 ½ quarters, and then traded runs in the last 11 minutes of regulation. Vicksburg got out to a 55-47 lead midway through the fourth quarter after Clinton went nearly five minutes without a point, but Clinton finished the period on a 9-1 run of its own to force overtime.

Bell scored seven of the Arrows’ points during their run, including a 3-pointer to tie it at 56 with 38.9 seconds to go.

After Vicksburg missed the first shot of overtime, Clinton held the ball for nearly 2 ½ minutes. Point guard Allen Hughes stood halfway between the 3-point line and halfcourt with the ball on his hip for most of that span, which was just fine with Vicksburg coach Kelvin Carter.

The Gators, he said, were fatigued and had a short bench as well as two players in foul trouble.

“I was very happy because it was 0-0,” Carter said with a laugh. “It was a tie game. We needed rest. He’s got nine or 10 guys and I’ve only got six or seven. We were in foul trouble, too, so hold it. We appreciate that. We needed that.”

When Clinton finally put the ball in motion, Hughes drove, was fouled, and split a pair of free throws with 25.3 seconds left for a 57-56 lead.

On the ensuing possession the Gators patiently worked the ball around until Hardy drove through the lane and stopped at the baseline. Brown came in behind him a second later and Hardy quickly flipped the ball to his teammate, who elevated for the go-ahead dunk with eight seconds left.

“He told us to go for the win. He told Sean to drag them out, I set the screen and it’d be ready for the three, but if it wasn’t there try to dive in and go for the dunk,” Brown said. “It feels great. I always wanted to be the player to take the big shots at the end and today was the day. I thank God for that.”

Clinton then turned the ball over with 3.5 seconds left in its rush up the court. Hardy was fouled and hit two free throws for a 60-57 lead, and a desperation three-quarters court heave by Clinton’s Kimani Hamilton was well off the mark, giving the Gators one of the biggest upsets of the season in Mississippi high school basketball.

“It’s probably the best win we could have. This is the No. 1 team in the state. An undefeated team, probably on their way to the 6A state championship … it’s super duper gratifying. My guys played their butt off,” Carter said.

Just as importantly, the victory gave the Gators a huge boost heading into the Region 4-5A tournament next week. They have one regular-season game left, Friday at Brookhaven, and then will face Provine in the first round on Feb. 9 at Vicksburg Junior High.

Vicksburg beat Provine in both regular-season meetings, but the two games were decided by a total of three points. That includes an 83-81 decision last week in Jackson.

“No doubt about it, it’s going to be a dogfight,” Carter said. “We’re just going to go back to the drawing board. We’ve got one more game against Brookhaven to try to get ready for Provine. I told them you’re not playing Brookhaven, you’re playing Provine on Friday and playing Provine again on Tuesday.”

OXFORD (AP) — Devontae Shuler and Ole Miss put the clamps on No. 11 Tennessee’s offense in a game characteristic... read more