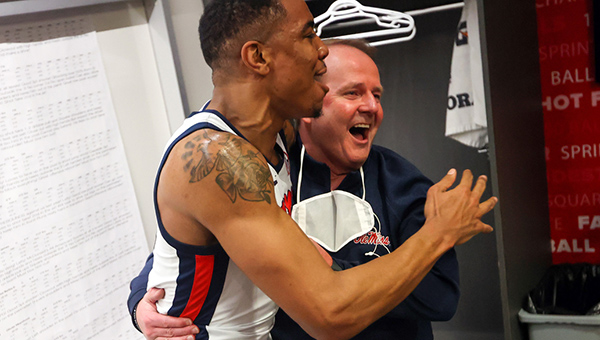 OXFORD (AP) — Devontae Shuler and Ole Miss put the clamps on No. 11 Tennessee’s offense in a game characteristic of the Southeastern Conference’s two stingiest teams.

Shuler scored 15 points and fueled a second-half rally as the Rebels beat the Volunteers 52-50 on Tuesday night, their first win over a ranked team in more than two years.

Tennessee went 12:27 without a field goal in the second half.

“Down the stretch, we made some game-winning plays,” Ole Miss coach Kermit Davis said. “It was just a whole group effort, and I’m just so happy to see this team taste that victory.

“That team right there is so well-coached and they’re used to winning those types of games.”

The Vols came in allowing 59.4 points per game and the Rebels 63.

Trailing by five points in the final minute, Tennessee cut it to 51-49 on Keon Johnson’s 3-pointer with 42 seconds left to break its long drought. Shuler worked the clock down but missed on a drive, and Johnson grabbed an offensive rebound and was fouled.

He missed the first free throw with 3.5 seconds left but made the second to make it 51-50. The Vols quickly fouled Robert Allen, who made 1 of 2 foul shots.

Josiah-Jordan James’s 3-point attempt at the buzzer bounced off the rim.

“Coach was on us hard the last couple of games, and I feel like we just took that and came out with one of our better defensive games for 40 minutes,” said the Rebels’ Romello White, who had 14 points. “It translated to offense, too. We had a great game tonight.”

The Vols were coming off an 80-61 victory over No. 23 Kansas, but couldn’t manage a similar offensive performance.

“We were not tough enough to finish it,” said Yves Pons, who led the Vols with 13 points.

Added James: “It shows that we’re still a pretty immature team, not being able to come in locked in and get the job done.”

Johnson scored 11 points for Tennessee. James finished with 10 but didn’t have a field goal after making three 3-pointers in the first 10 minutes.

Shuler scored seven straight points to cap an 11-0 run that gave Ole Miss a 46-42 lead with 4:37 remaining. He scored on a steal and a fast-break layup, giving Ole Miss its first lead since the opening minutes, and followed up a missed shot by burying a 3-pointer.

The Volunteers missed 11 straight shots down the stretch but managed to tie the game by hitting 4 of 6 free throws. Johnson made a pair with 2:54 remaining.

Vols coach Rick Barnes found plenty of fault in his team’s performance, including some turnovers that he blamed on laziness.

“We did not protect the ball the way we needed to,” Barnes said. “I mean, we had some just horrendous turnovers. And when you add to that we missed some shots I like to think we could make around the rim.

“And you add that missing the front ends of some 1-and-1s in free throws, it makes for a long night.”