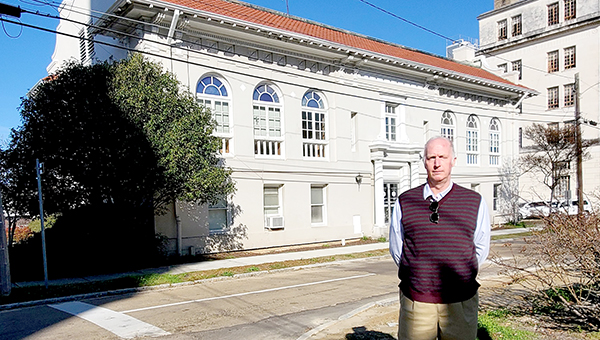 The 105-year-old former Carnegie Library at the corner of South and Monroe streets will get an upgrade, funded in part by a $103,370 grant from the Mississippi Department of Archives and History. The building currently houses the city’s Community Development Department.

The Board of Mayor and Aldermen Monday authorized Mayor George Flaggs Jr. to sign a certificate accepting the grant.

Community Development Director Jeff Richardson said the city is providing a $25,842 match under the grant, which will pay for removing the building’s boiler, as well as upgrading the building’s electrical service, windows and doors.

Any work on the building must first be cleared by the Department of Archives and History due to the age of the building and because it sits in the historic downtown district.

“I’ve got to sit down with Archives and History about how they would like us to spend the money,” Richardson said. “I’m hoping the boiler and the electrical work will be on the top of the list.”

The boiler, he said, is full of asbestos and will be removed.

After the meeting, Richardson said he applied for a $400,000 grant to cover not only the boiler and electrical work but other necessary work on the building.

Because he did not receive the full amount he requested, Richardson said he now needs to re-examine the project and determine what areas are in the most need of repair.

“I might be able to get some of the woodwork, some of the doors worked on and maybe some of the windows fixed that are in really, really bad shape,” he said. “Archives and History has done an admirable job of trying to help modernize these old buildings so they function and are usable. I would like to replace the two separate metal doors on the front and the side door with something more historically accurate.”

The catalyst for the Carnegie Library building came in 1910 when the Vicksburg Library Association contacted Andrew Carnegie to ask if he would help the Association build a new library.

Carnegie was an early 20th-century industrialist and philanthropist who donated money to build more than 2,500 public libraries nationwide. Eleven Carnegie libraries, including the one in Vicksburg, were built in Mississippi between 1904 and 1916. Most of the buildings still exist, although only three are still used as public libraries.

A library of sorts had been established on the third floor of Vicksburg’s then-new city hall in 1903, but the Association needed a larger building.

The Carnegie Library was completed in February 1916 and opened that March. It served as the city’s library until 1979 when the present library opened.

The total cost of the Carnegie building was $28,000, with $25,000 of the cost donated by the Andrew Carnegie Foundation on the condition the city find a lot for the building and agree to support the library once it opened.

The Civic League raised $5,000 to purchase a site for the building and later bought a lot on the northwest corner of Monroe and South streets for $4,000. The remaining money was used to purchase books and supplies. Initially, the building’s main entrance was on Monroe Street, but Richardson said the doors facing Monroe are kept locked.

By Mary Margaret Edney | ERDC Public Affairs Specialist   When it comes to emergency response, it’s said that an... read more