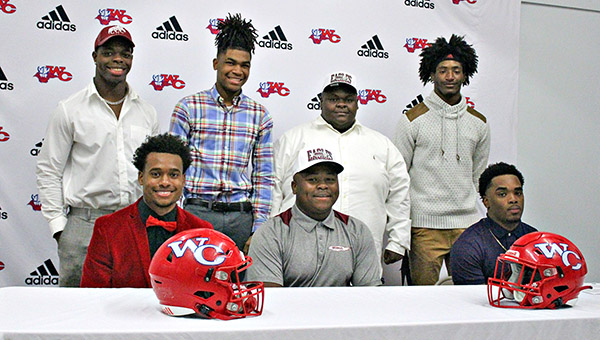 From players to managers, junior colleges to four-year schools, and even a special guest appearance by a former star, Warren Central’s signing day ceremony offered something for everyone.

Six players from the 2020 roster signed with junior colleges or four-year schools on college football’s national signing day on Wednesday.

“It’s an amazing feeling to see my brothers succeed and go farther. I’m very proud. It’s like seeing my own blood go to the next level, and I’m very proud for each and every one of them,” said cornerback Tevin Bell, who signed with Northwest Mississippi Community College.

“It’s awesome. My family’s here, my coaches are here, everybody’s got big smiles. I love it,” said Evans, who caught seven passes for 112 yards and one touchdown last season.

Signing day was one last get-together for Warren Central’s talented 2020 team, and also a chance to dream about the future. Smith, The Vicksburg Post’s 2020 Defensive Player of the Year, said he was doing just that when he signed with Coahoma Community College.

Coahoma has been at the bottom of the Mississippi Association of Community Colleges Conference standings for nearly a decade, but finished 3-2 in the abbreviated fall 2020 season. Smith said he was looking forward to helping the program take the next step forward.

“I wanted to be a part of that. I wanted to be a part of something special, and they’re building something special up there,” said Smith, who had 14 sacks over the past two seasons. “The coaching staff is amazing. They’re flipping everything around. There’s new buildings up there, there are new facilities for football, they’re making sure their students are graduating. It’s everything you would need in a successful football program.”

Collins and DeFrance were trying to build a different sort of future when they took the offer to become team managers at Hinds. Both linemen said they wanted to begin working toward a coaching career, and the chance to start that education with a full scholarship was a better opportunity than battling for a non-guaranteed roster spot.

“They were going to put me on the practice squad and I would have been on a partial scholarship, so why get beat up for nothing when I can get a full scholarship?” Collins said with a laugh.

DeFrance said it would be weird giving up playing football, but he was happy with his decision.

“I really wanted to be a football coach. All of the coaches here at Warren Central inspired me. I told (Hinds coach) Kelly Murphy I wanted to be a manager to stay around football while trying to become a football coach,” DeFrance said. “I love the game of football. Not playing it is probably going to mess me up for the first couple of weeks, but I think I’ll get used to it.”

Bell and Thompson, meanwhile, will continue their playing careers at Northwest Mississippi and Mississippi Delta, respectively.

Bell is joining a Northwest Mississippi squad that won the MACCC championship in 2020 and has a long track record of success both on the field and with sending players to the next level.

“When I went up there and visited, it was the best option for me at the time,” said Bell, who had 17 tackles and a team-high five interceptions last season. “The coaches were really nice and seemed sincere about everything they were saying. They’re building a nice thing over there. They just won a national championship and the facilities are amazing, and I just felt a good vibe from them.”

Thompson plans to go back to his roots at Mississippi Delta. He switched positions from running back to quarterback last season, but was signed by the Trojans as a running back and slot receiver.

The versatile Thompson ran for 1,366 yards and 13 touchdowns in his high school career, and caught 25 passes for 222 yards and two TDs as a junior. He said another position switch was not a big deal.

“I played it already so it’s not a big deal,” Thompson said.

He added that he signed with Mississippi Delta because of the overall appeal of what it offered to him as a player and person.

“Everything was around love, and family, and welcoming people in that wanted to move on and better the program,” Thompson said. “It’s another opportunity for me to go to school and play football again, and get my education.”

After a season that was in limbo from the first game to the last because of the COVID-19 pandemic, all of the Warren Central signees were grateful for the opportunity to continue their football careers. Signing day, for them, meant just a little bit more than usual.

“It’s just a blessing,” Smith said. “From everything that happened this year with the pandemic, scholarships weren’t really given out to our class. For us to get one is a blessing.”

Porter’s Chapel Academy went down fighting in the MAIS District 4-2A boys’ basketball tournament, but it still went down. The... read more