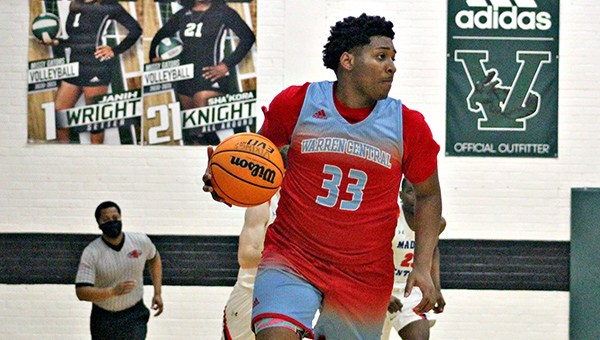 It’s been a difficult season for Warren Central’s boys’ basketball team, filled with double-digit losses and long bus rides home on most nights.

There are still a few dwindling opportunities for success, however, and that is what the Vikings are trying to focus on as they turned their attention to the postseason this week. They nearly knocked off Madison Central last Friday — a game-tying layup rolled off the rim in the final seconds of a 60-57 loss — and faced Northwest Rankin in the regular-season finale late Tuesday night.

The Region 4-6A tournament awaits next week, and the Vikings (2-15, 0-6 Region 4-6A) will need to win one of two games to qualify for the MHSAA Class 6A state tournament. Coach Bruce Robinson was hoping to build on the momentum from the Madison Central game and not dwell on what preceded it.

“We know that we have to win one game to get into the playoffs. That’s what we’ve been talking about and building toward, trying to figure out how to beat one of these teams,” Robinson said. “We don’t believe in moral victories, but we’ll take them. We haven’t had many close games, so you’re not just going to jump up and win a game unless you have a close one.”

The loss to Madison Central might have been one of Warren Central’s best games of the season. It stayed with the Jaguars — who won by 17 points when the teams played a week earlier — the whole way, and even answered a run in the third quarter with a 9-0 burst of its own to tie the game at 36.

Del’Jayvien Harried scored a game-high 25 points in the kind of individual performance the Vikings will likely need if they’re to win a game in the region tournament, and role players like W.L. Burks (nine points on three 3-pointers) and Taylor Mitchell (eight points) also contributed.

Harried missed a layup with two seconds left that would have tied the game at 59, and Madison Central’s Shane Davis sank one free throw on the other end to allow the Jaguars to escape. Although they came up one basket short in the end, there was no denying that Warren Central sent a message it might not be the easy out everyone assumed when the postseason begins next week.

“It’s huge for our confidence. Our team has been beat down, and beat down, and beat down by so many things that we cannot control, and for us to come out and play like we did, and for D.J. Harried to put us on his shoulders and play like he did, and give us a chance to win this ballgame, that’s huge,” Robinson said. “We needed this. I don’t know if we needed to win, but we needed a solid 32-minute performance.”

Warren Central will face top-seeded Clinton (15-0, 6-0 Region 4-6A) in the first round of the region tournament, which will be played at Warren Central Junior High.

The Vikings and Arrows will play Tuesday at 7:30 p.m., after Madison Central and Murrah play the other first-round game at 5 p.m.

Clinton beat Warren Central by 40 and 28 points in their two regular-season meetings, and Robinson was under no illusions that the third time would definitely be the charm. He also stressed that the Vikings don’t necessarily have to win that game to advance to the state tournament. They can also get in by beating either Madison Central or Murrah in the consolation game on Feb. 11.

“We know who we are. And we know that to get to the playoffs, we have to win one game,” Robinson said.

Win or lose, two-and-out or an improbable run to a region championship, Robinson added that he was hopeful the memories of this season will not soon be forgotten by his players. Even in dark times, he said, the camaraderie and relationships developed make a bad season worthwhile.

“We’ve been encouraging the kids to stay together,” Robinson said. “One thing that we really wanted out of this year was for my seniors to leave here and feel like they really enjoyed their senior season. Twenty years from now, when it’s all said and done, these guys in this locker room aren’t going to remember being 2-and-a-whole-lot. They’re going to remember the fun that they had.”