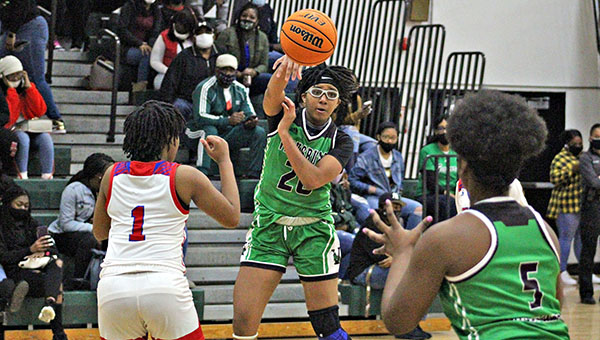 It wasn’t quite how they envisioned it, or even wanted it, but the Vicksburg Missy Gators clinched a berth in the MHSAA Class 5A girls’ basketball tournament without making a shot on Friday.

Vicksburg (15-5) earned a bye into the championship game of next week’s Region 4-5A tournament when first-round opponent Ridgeland was sidelined by COVID-19 issues within its program.

“I’m looking at it right now as a bump in the road because of these COVID issues. It’s not a positive or a negative for us,” said Vicksburg coach Troy Stewart, who learned the news a couple of hours before his team faced Brookhaven in the regular-season finale Friday. Brookhaven beat Vicksburg 62-52. “We’re going to have rust that we’re going to have to keep off of us. I’m just doing what we can to keep us healthy and ready.”

The unexpected bye will give the Missy Gators an easier path to a repeat as region champs. They ended a 21-year drought by winning last year’s tournament, and emerged as a heavy favorite this year after winning all six regular-season region games by double figures. The only team that stayed within 20 points of them was Ridgeland.

Vicksburg used last season’s region title as a springboard to the Class 5A semifinals. Stewart said repeating will be a key step not only in this postseason run — the region champions also earn a first-round bye in the state tournament and a home game in round two — but in the evolution of the program as a whole.

“We’re trying to build a program to have the mindset instilled inside the girls that we’re the team to beat no matter who we play,” Stewart said. “I don’t think it’s going to be a big difference for us to go in as a favorite or underdogs. I always want to play like it’s 0-0 until the time runs off the clock.”

Fortunately, Stewart said, he believes the Missy Gators are ready. They don’t have any major injuries or COVID-19 issues heading into the postseason, and seem ready to make another deep run in the playoffs.