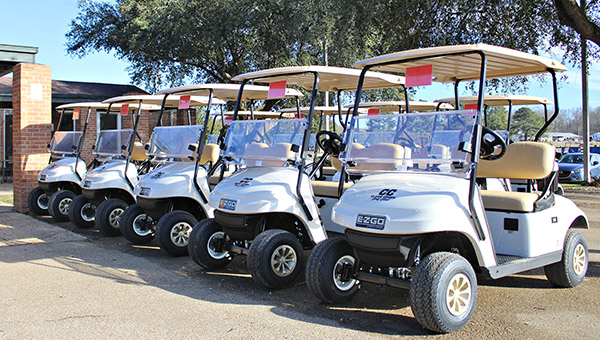 In front of the clubhouse at Clear Creek Golf Course, a shiny new fleet of carts rolled off the delivery truck just after sunrise Friday. Meanwhile, a couple hundred yards away, a work crew was busy installing part of a new irrigation system.

It was indeed a busy morning at the public golf course in Bovina, but also one that offered a glimpse of the future as two major projects started to come together.

The Warren County Board of Supervisors recently approved the purchase of 50 new golf carts for Clear Creek, as well as the replacement of the 40-year-old irrigation system that runs throughout the course. The two projects cost nearly $500,000 combined, and Board of Supervisors president Dr. Jeff Holland called it a good investment in a community asset.

“It’s a good investment in the community,” Holland said. “A golf course is a fundamental part of any community. This is a tourism community and a community with a lot of seniors, that stresses outdoor activities, and all of that is associated with the golf course.”

The old fleet of 40 golf carts was leased in 2018 and was due for replacement. The new set of 50 carts was purchased rather than leased, which Clear Creek’s head golf professional Randy Tupper said will save money in the long run.

The new carts are also more fuel-efficient — they get 44 miles per gallon of gas on an 8-gallon tank; a full tank of gas could be used for as many as 40 rounds of golf — quieter, and include a larger steering wheel and a USB port in the dash for golfers to plug electronic accessories into.

The carts were purchased from Ben Nelson Golf and Outdoors in Gluckstadt for $217,900.

Alvin Taylor, president of the Warren County Parks and Recreation Commission, said the 10 extra carts were purchased because of an uptick in play at Clear Creek over the past year that increased demand.

“We would run out of carts and golfers would have to wait. Unlike other sports, for whatever reason golf did pick up after the pandemic,” Taylor said. “The Parks and Recreation commissioners thank the Board of Supervisors for our budget. We wouldn’t be able to do anything without them.”

The irrigation project, meanwhile, began in January and could conclude by early March, depending on weather. Duininck Golf is replacing the course’s original irrigation system with a modernized version that will allow for better management and course quality.

The cost of the new system is about $269,800. Tupper said, however, that like the carts it will save money in the long run by reducing maintenance costs and water and electricity usage, while also making the course better for players.

Hard-to-find underground leaks have developed in the old system, and maintenance workers also had to manually operate the sprinklers on each hole. Tupper said it takes as long as 14 hours to irrigate the entire course. The new system will include a central computerized operating station that allows crews to adjust a number of variables such as humidity and water flow.

“This is the first major irrigation update since the golf course was built in 1978 or ’79,” Tupper said. “Hopefully it’ll reduce maintenance as well. Every (sprinkler) head will be new. We’ll be able to do things on the maintenance side that we haven’t been able to do, and that will save us money.”

Clear Creek will remain open while work on the irrigation project continues, and one more addition is planned. Tupper said forward tees that shorten some of the longer holes to 100 or 150 yards for junior golfers will be added.

As winter fades into spring, Tupper said he was eager to show off the retooled course. He plans to have an open house in April, introduce a reduced “Family Fun Time” evening rate, and conduct some junior golf clinics in addition to the usual offerings.