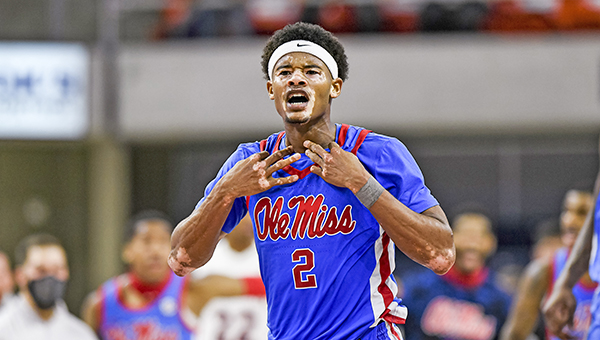 AUBURN, Ala. (AP) — Devontae Shuler hit a step-back jumper from inside the center of the arc with 0.2 seconds left in overtime, and Ole Miss overcame a 14-point, second-half deficit to beat Auburn 86-84 on Saturday.

Jaylin Williams, Devan Cambridge, and Allen Flanigan scored 16 points apiece for Auburn. Freshman Sharife Cooper added 15 points and had a career-high 14 assists.
Ole Miss trailed trailed by 14 points early in the second half and 61-51 with about 10 minutes left.

Shuler scored five points, including a 3-pointer, and White added a layup as the Rebels closed on a 7-2 run to force overtime tied at 72. It was the only tie of the second half and the Rebels’ first lead since 16-15 with 13:30 left in the first half.

Ole Miss overcame a double-digit deficit in the second half for the second game in a row, after beating Tennessee 52-50 on Tuesday.

“So proud for our players hanging tough,” Ole Miss coach Kermit Davis said. “We got good play off the bench. (Devontae) Shuler and (Romello) White were fantastic. Just a great week for the Rebels.”

AJ Lawson’s dunk with 13:44 remaining brought the Gamecocks within 50-49. Mississippi State (11-9, 5-6 SEC) responded with a 13-0 outburst over the next five minutes and South Carolina never recovered. The run started and ended with jump shots from Stewart.

Derek Fountain registered a solid all-around performance off the bench for Mississippi State He either set or tied his career-highs with nine points, four rebounds, two assists, two steals and a block over 29 minutes of action.

Fountain drained three of his four shot attempts, canned both of his 3s and added a free throw for a traditional three-point play.

“The player of the game, for me, was Derek Fountain. He came in the game with incredible stability to be able to play a matchup with their small forwards at the power forwards position … He’s always learning and has a phenomenal attitude,” Mississippi State coach Ben Howland said. “I’m really happy to see a guy like that being rewarded. There was no nervousness out of him, it was really cool.”

The Bulldogs head home to face LSU on Wednesday.

Alcorn made one field goal in a nearly 13-minute span of the second half, which allowed Jackson State to open a 54-45 lead with 6:52 remaining.

For the first time in 2021, the Vicksburg Missy Gators walked off the court on the wrong end of the... read more