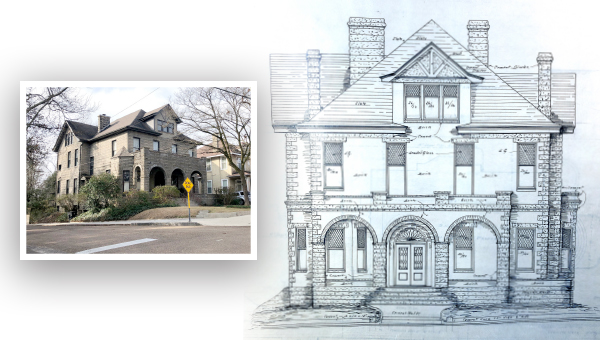 The Flora and William B. Levy House, located at 1338 Chambers St., was designed by M.J. Donovan. Construction of the home, done by J.H. Jaffray Construction Company, was completed in 1908.

This is the first in a series about Vicksburg houses that were built using new technology developed at the turn of the century — the hollow concrete building block.

Hollow concrete block construction began in earnest after Harmon S. Palmer of Chicago patented his machine for producing hollow concrete blocks in 1900. In fact, so influential was his invention that a concrete trade journal published in 1906 stated that concrete blocks were practically unknown in 1900 but by 1906 there were more than a thousand companies and individuals engaged in their manufacture in the United States.

Palmer started the Hollow Building Block Company in 1902 and in the first year he made four hundred block machines which sold for $200 each.

While some machines were bought by individuals to construct their own buildings, many were acquired by builders and contractors who were soon producing blocks for sale to the public. It didn’t take long for the market to be flooded with machines very similar to Palmer’s but produced by other manufactures.

Palmer spent time and money defending his invention and accused these competitors of violating his patent, to no avail. By 1907, there were over 100 companies producing this type of machine or variations on it.

The machines came with different faceplates that provided a great variety in design, from a standard plain face similar to a modern cinderblock, to cobblestone face, pressed brick face and even molds for decorative trim blocks. Among the most popular was the standard rock face designed to replicate rough cut or rusticated stone.

The first period of the hollow concrete block industry, from circa 1900 to 1920, was dominated by what Pamela Simpson referred to in her book Cheap, Quick and Easy- Imitative Architectural Materials, 1870-1930, as the “woodshed or backyard phase of concrete-block manufacture.”

During this time, the majority of hollow concrete-block buildings were constructed by builders using one of the Palmer-type machines and making the blocks one at a time. Many homeowners used one of these machines to build their own homes and support structures and then stored the machine away.

The popularity of these machines for such uses is supported not only by quotes from homeowners in various catalogs and advertising materials but also by the fact that Sears offered for sale, not only pre-cut wooden houses but also kits for concrete houses.

However, the blocks were not sent by Sears because most of the customers wanted to make their own. Some early machine owners, having built their own houses, moved on to build houses for others, sometimes even starting contracting businesses.

The Levy House at 1338 Chambers St. was designed by M.J. Donovan in 1907. In March of 1907, the J.H. Jaffray Construction Company was selected to build the house.

It was originally designed to be brick veneer with concrete stone (hollow concrete block) quoins, as is seen in the Donovan drawing above. Construction was ongoing in May 1907 and an article in the Vicksburg Evening Post stated the home would now be finished in cast stone veneer instead of brick.

An article in the Vicksburg Herald in June reported that Jaffray Construction was making good progress. In February 1908, however, the house was not finished and a contract to finish the house “within a time limit of 90 days” was given to H.H. Havis.  They must have done so because the Levy’s old house was advertised for rent in June 1908.

Flora and William were married in the temple on Nov. 20, 1889, and had two children, Irma and Jacob. Irma married Arthur Klein of Meridian on Oct. 17, 1911, and moved to Meridian.

In October 1919, Mrs. Levy advertised her entire household contents were up for immediate sale because of “removal.” In 1921, the house was occupied by William A. and Ella Morgan and the Levys lived next door at 1332 Chambers Street.  Morgan was in the timber business.

More on hollow block construction and Vicksburg buildings built with the blocks next time.