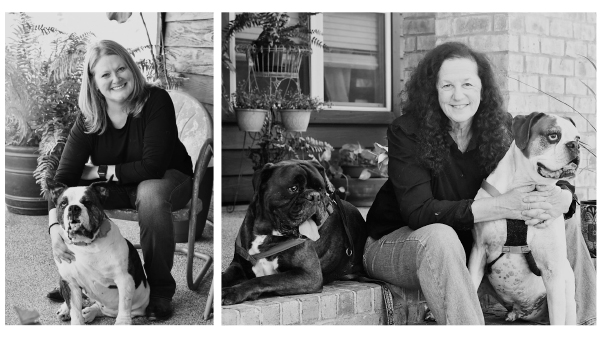 The two old girls had ailments that were not going to improve over time.

One had spondylosis and the other benign tumors growing all over her body.

And while these conditions hampered their way of life, it didn’t mean there was no life left.

Unfortunately, dogs that aren’t playful and cute are not often the type of dogs people want to adopt. The likelihood of  Sabyn and Wobey spending their golden years at a shelter — or maybe worse — seemed inevitable.

But thanks to Kristi Weaver and Diane Lutz, owners of Coast to Coast Transport, LLC, a licensed rescue-only transport service for homeless, abandoned, neglected and abused animals, these dogs found a home.

“We took the dogs up on our special transport and it was just a beautiful thing when the woman who was going to be the foster to the dogs came and got them. I just cried,” Weaver said. “When she got the bonded pair home she had like almost a queen size mattress made into a dog bed in the living room for them.”

Weaver and Lutz offer their services to animal shelters in Mississippi who partner with shelters in the northeast, all in an effort to find homes for dogs.

Putting thousands of miles on their tires, Weaver and Lutz make regular trips to the northeast transporting dogs from the south.

“There are no stray dogs in the north,” Weaver said. Many states in the north have strict spay and neuter laws unlike in the south, which can lead to neglect, abuse and mistreatment of animals. Dogs “in the thousands,” Weaver said, have been transported to rescue shelters in the north where they are then adopted by families who will care for and love them.

Weaver has a passion for helping animals and has been volunteering at shelters for about a decade, a commitment she looks at as a “calling from God.”

Walking out on faith to start an animal transport business, Weaver said, she has already been blessed and is grateful to have the opportunity to work at a job she loves — helping animals find a forever home.

“We are taking disabled dogs that people have thrown away and don’t want any more or very abused and broken dogs whose spirits have been broken and transporting them up north to our rescue partners who are finding them the perfect family,” she said.

Weaver shared a story about one of the many dogs she has transported up north.

The dog, she said, had been dumped at a vet after being hit by a car. Sadly, the dog’s legs had been injured to the point he could no longer use them and would now have to use a dog wheelchair to get around.

While his future looked bleak, she said, there was thankfully a family that wanted to adopt him.

“The dog now lives in Maine,” Weaver said. “He has an Instagram page. He has siblings who are fur babies and he goes to the beach almost every day with his family. So when you look at that and you think, ‘man here is this discarded dog who was treated like trash and he is now living life like all of us would like to live.’”

Recently, Weaver and Lutz set out to transport 29 dogs, which is no easy task.

Sometimes the drive is hundreds of miles away to partner animal shelters located in New York, Rhode Island and Maine. Several stops have to be made to walk and feed the dogs as well as clean out puppy kennels.

But it’s worth it, Weaver said.

“This is the thing that God put on me that burns my soul. I think that each of us, as people, are created to do something and care for something and to have a purpose in this life,” Weaver said. “And being able to find animals a happy forever is my purpose.”