Clinton holds off Warren Central in Region 4-6A tournament 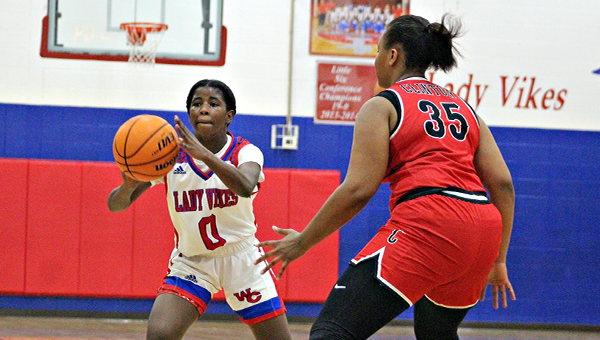 Warren Central only let its guard down defensively for a minute Monday night — well, 2 ½ minutes to be precise — and paid the price.

Clinton’s Taelar Felton made three 3-pointers in the final 90 seconds of the third quarter, and another in the opening minute of the fourth, to key a decisive run that propelled the Lady Arrows to a 56-45 victory in the first round of the MHSAA Region 4-6A girls’ basketball tournament.

Felton finished with 19 points. Her barrage took Clinton’s lead from five points to 18 and, although Warren Central made a late run of its own, it stood up as the difference in the game.

“(Felton) had 16 in the first game and nine in the second game and all of them, pretty much, were 3s. So we know who she is. But until the youngsters really get a feel for it, it didn’t stick in their head. If we played them again, they would certainly know who she is,” Warren Central coach Darein Hilliard said.

Clinton (12-4) advanced to Friday’s championship game against Madison Central, which beat Murrah 43-21 in another first-round game Monday. Both teams clinched a spot in the Class 6A playoffs with their victories on Monday.

Warren Central (5-17) will play Murrah at 5 p.m. Thursday in the consolation game, with the winner moving on to the Class 6A state playoffs and the loser having its season end.

All region tournament games will be played at Warren Central Junior High.

“We’ll instill in them tomorrow that it could be your last practice, and you’ve got to get better than your last one. We’ll look forward to playing whoever we’ve got to play,” Hilliard said.

The Lady Vikes did play better than in previous meetings with Clinton — they lost by 18 and 29 points in two regular-season matchups — but still couldn’t quite steal a game that seemed there for the taking.

Several times in the first three quarters, the Lady Vikes closed a small gap to four or five points only to see Clinton answer with a couple of baskets of its own. It was 29-24 late in the third quarter when Felton got hot and changed the entire dynamic of the game.

Her three 3-pointers in the last 1:30 of the period took the Lady Arrows’ lead to 41-26. She drained another with 7:11 left in the fourth to make it an 18-point game. “There was somebody that was supposed to have her, that didn’t have her. A missed assignment. You can’t call timeout every time and say we’ve got to stop No. 3, you’ve got to coach that on the fly,” Hilliard said.

At the same time Felton got hot, Warren Central went cold. It only made one basket in a 5 ½-minute span and still trailed by 19 points when it finally got rolling.

A three-point play by Zy’kerri Segrest and a steal and layup by Ta’Miya Sims sparked a 15-3 run that cut a seemingly insurmountable deficit to seven points, 52-45, with 1:20 to go. Sims finished with 20 points — half of them in the fourth quarter — and 10 steals, while Segrest and 10 points.

Clinton aided Warren Central’s comeback by making just 8 of 19 free throws in the fourth quarter, and 4 of 12 in the final 1:10.

Those four makes were, however, enough to keep the Lady Vikes at bay. Warren Central ran out gas, committing two turnovers and missing its last three shots despite getting several turnovers and rebounds in the final minute. It finished with 24 turnovers in the game.

“I was not coaching the score, I was coaching the game. It seemed like every time we got an opportunity to cut into the lead we’d wind up with a turnover or a travel. We just couldn’t get over the hump. As we continue to grow, we’ll be able to take care of that,” Hilliard said. “The effort was still there. We got a couple of turnovers when we were supposed to be fouling. We just couldn’t get over the hump.”