Gators push past Provine and into Region 4-5A championship game 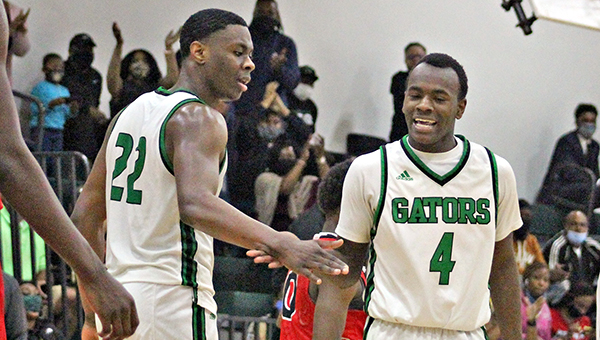 Vicksburg High’s Taylon Smith (4) celebrates with teammate Jaden Williams (22) after making a 3-pointer and getting fouled in the fourth quarter against Provine on Tuesday. Smith converted the four-point play and finished with 12 points to help the Gators win 58-46 in the MHSAA Region 4-5A tournament. (Ernest Bowker/The Vicksburg Post)

The Vicksburg High senior clanked a few 3-pointers off the rim, had one roll out, and a couple more that were just plain off target. On what felt like an off night, he took a bit of a back seat in the Gators’ offense as they tried to keep pace with Provine in the first round of the MHSAA Region 4-5A boys’ basketball tournament.

When the opportunity presented itself again, however, Smith didn’t hesitate to jump right back into the driver’s seat.

Smith made two clutch 3-pointers in a 30-second span in the fourth quarter, keying a decisive 10-0 run that propelled Vicksburg to a 58-46 victory and a fourth consecutive trip to the region tournament championship game.

Smith only finished with 12 points, but nine of them came in the last three minutes.

“Coach had told me to stay locked in coming out of halftime, so I get refueled up and I was ready to take big shots,” Smith said.

Keshawn Brown led Vicksburg with 14 points, and Sean Hardy scored 13. Samarion Grant had a game-high 23 points for Provine — he scored 15 of his team’s 19 points in the fourth quarter — and Donterry Russell added 11.

Vicksburg (14-6) will match up, yet again, with Callaway in the Region 4-5A championship game Friday at 7:30 p.m. at Provine High School in Jackson. It’s the fourth year in a row for this title game pairing, and Callaway has won the last three — as well as both meetings this regular season.

Callaway beat Ridgeland 89-53 in the other first-round boys’ game Tuesday. Provine and Ridgeland will play in the consolation game Thursday at 7:30 p.m., at Provine. The winner of that game advances to the Class 5A state tournament, and the loser’s season is over.

Both Callaway and Vicksburg clinched spots in the state tournament by winning on Tuesday.

Vicksburg coach Kelvin Carter said that, at this point, getting past the Chargers is as much a mental challenge as a physical one.

“We’ve just got to go play and let the chips fall where they may. Forget the name on the jersey. I think if we can get around that we’ll be in good shape,” Carter said.

Vicksburg beat Provine (2-6) twice in the regular season, by a total of three points. Although Round 3 wound up as a double-digit decision, it followed down the same path as the first two. The biggest lead for either team through 3 ½ quarters was eight points, when Vicksburg led 11-3 in the first quarter.

“Basketball comes down to matchups, and we just don’t match up well against Provine,” Carter said. “Their guards are super duper quick and we just have a problem with that.”

Vicksburg led 41-39 when, for the first time this season, it put some distance between itself and the Rams.

Keshawn Brown converted a three-point play with 3:28 to go, and 30 seconds later Smith was fouled while sinking a 3-pointer from the right side of the arc. Smith made the ensuing free throw, and then another 3-pointer with 2:30 remaining, to put the Gators ahead 51-39.

“You like hitting a shot like that,” Smith said of his rare four-point play. “When you look up and your teammates are screaming, you want those big shots. When you finally hit it, it’s a good feeling.”

Provine answered back with five points in 15 seconds, on a 3-pointer by Grant and a steal-turned-layup by Russell with 1:40 to go, but that was its last gasp. The Rams only scored one more basket, a jumper by Grant with 12.5 seconds left, and the Gators closed it out with some excellent free throw shooting.

Vicksburg went 7-for-8 at the line in the final minute of the game, and made 10 of 14 free throws in the fourth quarter. The last two free throws, fittingly, were made by Smith with 11.5 seconds left.