Murrah out of Region 4-6A boys’ tournament; WC advances to Class 6A playoffs 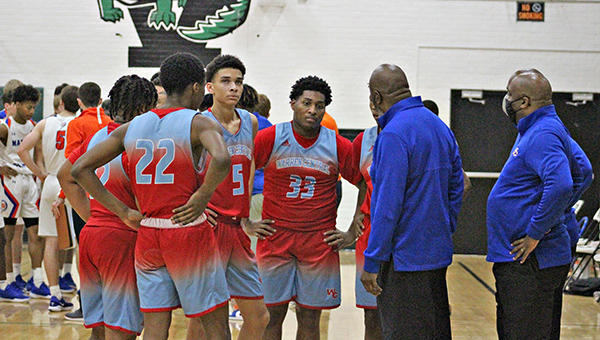 Warren Central players and coaches talk things over during a timeout a game against Madison Central in January. Warren Central will play Clinton in the Region 4-6A tournament Tuesday at 6 p.m. at Warren Central Junior High. (Ernest Bowker/The Vicksburg Post)

Warren Central’s boys’ basketball team advanced to the MHSAA Class 6A playoffs without even taking a shot.

Murrah was forced to bow out of the Region 4-6A tournament Tuesday morning because of COVID-19 issues among its roster, ending its season and sending the other three teams in the region — Warren Central, Clinton and Madison Central — on to the state tournament.

The top three finishers in each four-team region advance to the state tournament.

Murrah was scheduled to play Madison Central in the first round of the region tournament Tuesday evening. Instead, the Mississippi High School Activities Association has declared that game a forfeit and Madison Central will advance to Friday’s championship game.

Clinton and Warren Central will still play in the other first-round game Tuesday, although the time has been moved up to 6 p.m. The winner will play Madison Central in the championship game, and the loser will fill the third-place slot from Region 4-6A in the state playoffs.

Murrah’s girls’ team was not affected. It lost its first-round game against Madison Central on Monday, 43-21, and will face Warren Central in the consolation game on Thursday. The time of that game has been moved, however, to 6 p.m.

All Region 4-6A tournament games are being played at Warren Central Junior High.