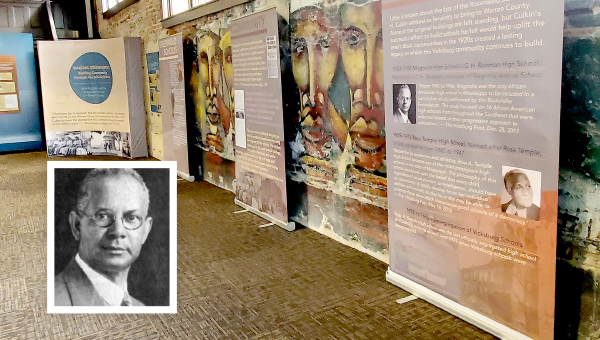 Displays showing information on Rosa A. Temple, John Culkin, and Rosenwald Fund Schools line one side of the Catfish Row Museum. The displays are part of the museum’s Black History Month exhibit about Culkin’s push to improve education for blacks in Warren County.

John Culkin, who served as Warren County superintendent of schools from 1912 to 1926, is the centerpiece of a Black History Month exhibit at the Catfish Row Museum beginning Friday.

The exhibit, “Raising Standards: Building Community Through the School,” recognizes Culkin’s efforts to build more than 20 Rosenwald Schools in Warren County to provide schools for black students. Museum founder Linda Fondren said the pop-up exhibit will be one of the museum’s permanent exhibits.

“We want people to understand black history,” Fondren said. “Not just the progress that African-Americans have made, but also the pain of what our shared history is all about.”

A Warren County native, Culkin is credited with ending the county’s one-room school system and replacing them with centralized schools. He also established the eight-month school year and expanded the curriculum. He set minimum education requirements and initiated competition between schools in athletics.

Culkin resigned in 1926 to practice law and later served as a state senator. He died in 1951.

Fondren described Culkin as “a very courageous superintendent. One of the reasons we picked him is he was really disturbed because there were no decent schools for blacks in Warren County.

“He confronted racism when education for blacks had to be handled like dynamite,” she said. “The local Ku Klux Klan already disliked him because he was Catholic and because he had two Jewish board members. We believe his work deserves wider recognition. That’s why we decided to do this pop-up exhibit on him and raising standards for our school system.”

Because the museum was unable to obtain many artifacts for the exhibit, Fondren said it was decided to concentrate on the community’s present education issues.

The exhibit provides information on the Rosenwald Schools, which were named after Jewish businessman and philanthropist Julius Rosenwald who established the Rosenwald Fund in 1917 to enhance education for blacks, especially in the South.

Money from the fund helped build schools for blacks in Southern states.

There is also biographical information on Culkin and information about Rosa A. Temple and the county’s black schools like Kings Elementary School, a Rosenwald school, and Magnolia and Rosa A. Temple High schools, which were known for academic and athletic excellence.

“We encourage the community, white and black, to visit the exhibit and learn how Culkin’s efforts left a lasting legacy,” Fondren said.

The museum is located at the corner of Jackson and Washington streets and is open Tuesday through Friday from 10 a.m. to 3 p.m. There is no charge to tour the exhibit.