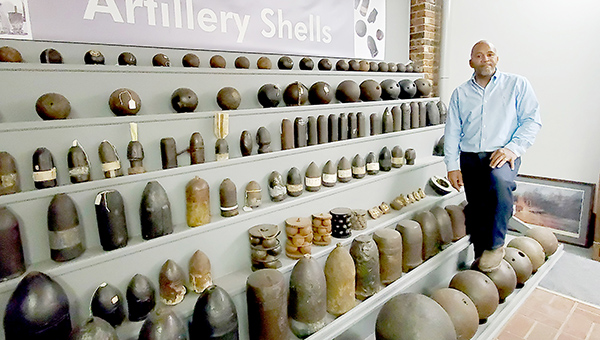 Charles Pendleton hopes people who visit his Vicksburg Civil War Museum will be inspired to learn more about the conflict and its effect on not just the soldiers, but also the civilians who lived through the war.

“My mission statement when I open is, ‘Knowledge is power, but don’t trust your power to someone else,’” he said. “Even when people come here and see something, I want them to research it for themselves.”

An opening date for the museum at the corner of Washington and China streets has not been set, but Pendleton said he has a tentative date of March 29 to have it ready.

Pendleton got the idea for the museum while going to different Civil War shows and seeing what other cities were doing.

“And Vicksburg being such an instrumental battle of the Civil War I just felt this would be a great addition to the city,” he said.

“We’ve got the (Vicksburg National Military) park and the (Old) Court House Museum, but both of those leave out the black story during the Civil War,” Pendleton said. “That’s what my focus is going to be.”

The museum will house the usual Civil War artifacts such as weapons, cannonballs and uniforms, but it will also have a replica of slave quarters, rows of cotton plants and a scale used to weigh the cotton picked by workers to show how southern blacks lived and worked during the period.

Pendleton also plans an exhibit to show how the war and slavery affected women, black and white. It’s a story he said has not fully been told.

“I wanted it to be all-inclusive and not controversial; no finger-pointing, no right or wrong,” he said. “But I do differ from other historians that the war was not about slavery. I think had there been no slavery there would not have been a war.

“Basically, what I’m going to do is show how life was for everybody during that time, black, white.”

The ultimate goal for the museum, he said, “Is maybe get the city or the nation to set aside a day to recognize the slave. We honor the fallen heroes who fight for this country, why not a day to honor the heroes who helped build this country?”

As controversial as the Civil War and slavery are, Pendleton said, the majority of the people he has dealt with concerning the Civil War museum have been white.

“And they’re very instrumental in helping me put this thing together, kind of like a community project — black, white, they want to see it done and not from pointing fingers or one side glorifying the other side,” said Pendleton, who is black.

“I think people are interested in history, and unfortunately for blacks, during that time period, they didn’t have much so there wasn’t anything to preserve. So I’m going back now and trying to show we played a great role, especially in Vicksburg.”

Besides featuring Vicksburg and life during the Civil War, Pendleton plans to highlight the battle at Milliken’s Bend where inexperienced U.S. Colored troops — including the 54th Massachusetts, a famous black regiment led by Robert Shaw that attacked Fort Wagner in South Carolina — repulsed a Confederate attack on Gen. Ulysses Grant’s supply base.

Pendleton wants the museum to be a catalyst that will help others pass on the full story of the Civil War.

“I think with the political climate we have going on, if we talk about this type of stuff with cool heads and get an understanding, I think we can pass knowledge on to the next generation and they can pick up from here and move forward, not have to go back and research like we’re doing now,” he said.