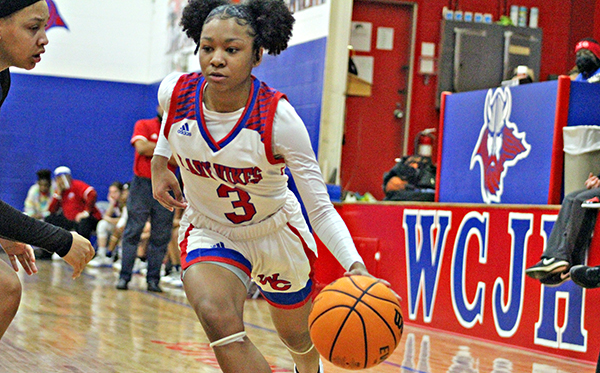 Kamren Edwards scored nine of her game-high 19 points in the fourth quarter, when Murrah finally took control of an ugly, sloppy contest and went on to beat Warren Central 42-36 in the third-place game of the MHSAA Region 4-6A girls’ basketball tournament on Thursday.

Murrah outscored the Lady Vikes 21-11 in the fourth quarter, with about half the points coming in a decisive 11-1 run midway through the period.

“They just wanted it a little bit better than us. Murrah is not going to just come over here and lay down. They want to go, too. Maybe the moment was just a little too big for them,” Warren Central coach Darein Hilliard said.

Murrah advanced to the Class 6A state tournament and will play Tupelo or Olive Branch on Monday. Warren Central’s season ended with a 5-18 record, and it failed to make it out of the region tournament round of the postseason for the third year in a row.

Despite another early exit, Hilliard said he saw some good things this season, such as increased turnout and the growth of several young players.

“It’s been a growing process. We became battle-tested. We played a lot of people all over the state. So we won’t have any excuses next year. If the Lord blesses me to be back I will be very excited, very motivated to take this group to another level,” Hilliard said. “We dressed 14 people for the first time since I’ve been here. I think that’s a major accomplishment in what we’re trying to build with this program.”

The two regular-season meetings between Warren Central and Murrah were low-scoring affairs — Warren Central won both, 37-36 and 34-33 — and the third was no different.

Neither team reached double digits until Deanna Adkins hit a jumper with 51 seconds left in the second quarter to put the Lady Vikes ahead 10-9.

“I think both teams were feeling each other out. As the game opened up a little bit, we didn’t score enough points in the first half. Ten points, that’s just not enough points,” Hilliard said.

The pace quickened considerably in the second half, and the slog of the first two quarters actually gave way to an entertaining finish. Warren Central led 25-21 entering the fourth quarter, but Murrah went on an 11-1 run to surge in front 34-28 with three minutes to go.

A 3-pointer by Zion Harvey pulled the Lady Vikes to within a point, 37-36, with 1:44 remaining but they couldn’t get any closer. They missed four free throws and several other shots from the field down the stretch, and Murrah was able to hit a few shots and hang on.

Zy Segrest led Warren Central with 11 points, while Ta’Miya Sims had seven points and six steals. The Lady Vikes made only 12 of 39 shots (30.7 percent) from the field in the game, and 7 of 17 from the free throw line.

“We turned the ball over. Turnovers got us,” Hilliard said of WC’s fourth-quarter swoon. The team had 15 turnovers in the game. “They were way down from what they normally are, but they still got us.”