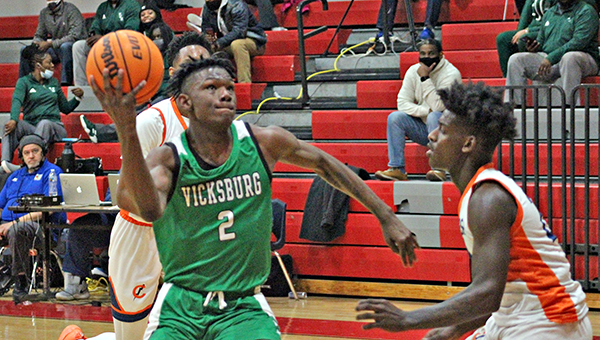 JACKSON — When he has a basketball in his hands, Daeshun Ruffin is like a magician. For his latest trick, he made the Vicksburg Gators’ region championship hopes disappear.

The Callaway guard and Ole Miss signee brushed off a twisted ankle in the opening minute of the game to score 30 points — including 13 in the fourth quarter — and sparked a decisive second-half run that propelled the Chargers to a 79-73 victory over Vicksburg in the MHSAA Region 4-5A boys’ basketball tournament championship game on Friday.

“Daeshun Ruffin. It’s as simple as that. There’s no other way to put it,” Vicksburg coach Kelvin Carter said. “That guy is phenomenal. No matter who you run at him, once he gets going it doesn’t matter who you put on him. We were just praying he didn’t get going, maybe he would have a bad game, but if he’s on it’s going to be a long night for anybody.”

Callaway beat Vicksburg (14-7) in the championship game for the fourth year in a row. Unlike those previous double-digit losses, however, this one didn’t seem nearly as emotionally devastating.

The Gators have hung with Callaway in two of their three meetings this season and, combined with some quality victories like the one over No. 2 Clinton earlier this month, those results have inspired a feeling that they belong among the state’s elite.

The next step toward proving it comes Monday when Vicksburg hosts Saltillo in the first round of the Class 5A state tournament. If the game needs to be postponed because of the ice storm forecast to hit Mississippi on Monday, it will be pushed back one day, as necessary, until it is played.

“Honestly, it’s not tough to take because we work hard, we try to prepare to beat Callaway, but nobody in the state has beaten them. We’re good. We’re in the playoffs, we’re moving on, and they’ve got a tougher route,” Carter said. “We’ve just been trying to show everybody we belong. We always get a bad rap at Vicksburg for some reason. We work hard. We have student-athletes that put the time in, and we’re just trying to get them some recognition.”

Forty-four seconds into Friday’s region championship game, Ruffin landed awkwardly while shooting a 3-pointer and crumpled to the floor. He had to be helped to the bench, and then to the locker room, but missed less than four minutes of action and his teammates more than picked up the slack.

Travaughn Taylor and Marquise Nichols both hit a pair of 3-pointers in the first quarter as the Chargers raced out to a 26-22.

“They went a whole quarter and only missed shots on two trips down. Then they hit 3s. Those points add up,” Carter said. “I think that first quarter really, really gave them an edge.”

All of Callaway’s players cooled off at the start of the second half. The Chargers went nearly four minutes without scoring and the Gators did take advantage this time, with an 8-0 run that pushed them into the lead. They were still ahead 54-48 with about three minutes to go when Callaway heated up again.

Ruffin’s 3-pointer just before the buzzer capped a 10-2 run that put the Chargers back in front, 58-56. They then scored the first eight points of the fourth quarter, capped by another Ruffin 3-pointer, to lead 66-56 with 5:45 remaining.

Vicksburg never got the lead back, but it didn’t fade either. Taylon Smith made a 3-pointer with 1:58 left to cut it to 70-66. Callaway’s Keiveon Hunt hit four free throws in the last 30 seconds, however, and Ruffin split a pair to close it out.

Smith finished with 14 points for the Gators, while Jaden Williams had 15 and Sean Hardy 12. Keshawn Brown led the team with 28 points, including three 3-pointers.

Hunt finished with 24 points for Callaway and Nichols scored nine. As a team, the Chargers hit 11 3-pointers in the game.

While disappointed to come up short of the program’s first region championship since 2013, Carter added that he was glad to be battle-tested in a difficult region heading into the state tournament. Five of Vicksburg’s eight region games, including the tournament, were decided by seven points or less.

“We’re moving on. I’m excited. We’re playing at home. I don’t think any team up north is as tough as Provine and Callaway and Ridgeland,” Carter said.