M-Braves, Shuckers will stay in Mississippi through 2031 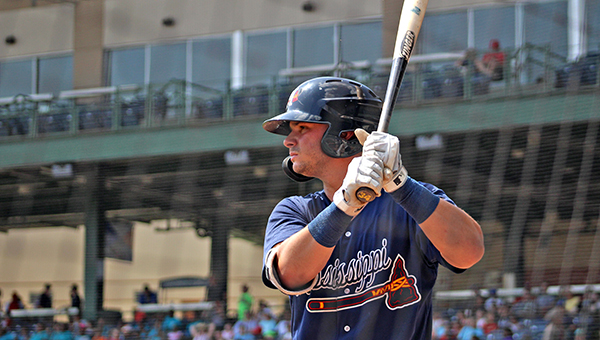 The Mississippi Braves’ Tyler Neslony waits on deck in the first inning of a game against Biloxi in 2019. (Ernest Bowker/The Vicksburg Post)

PEARL — The Mississippi Braves will remain in Pearl for at least another decade, even as the rest of the minor league baseball landscape shifts around them.

The M-Braves were one of 120 minor league clubs that agreed to accept Major League Baseball’s Professional Development League (PDL) license, the team announced Friday. The agreement will keep the M-Braves as the Double-A affiliate of the Atlanta Braves for the next 10 years.

Owned and operated by the Atlanta Braves, the M-Braves have played in Pearl since 2005.

“We are honored to continue as the Atlanta Braves Double-A franchise right here in central Mississippi,” said Pete Laven, vice president and general manager of the Mississippi Braves. “Our new agreement with Major League Baseball will further establish the M-Braves as a main ingredient in the development of future big-league talent. Most importantly, the great fans at Trustmark Park will be the beneficiary for years to come.”

The Biloxi Shuckers were also among the 120 minor league teams granted PDL licenses. The Shuckers have played on the Mississippi coast since relocating from Huntsville, Ala., in 2015, and now will be there for at least another 10 years. The Shuckers are the Double-A affiliate of the Milwaukee Brewers.

“We have a great long-term relationship with the Brewers and are really excited for the years ahead,” Shuckers General Manager Hunter Reed said in a statement.

MLB released a plan Friday for two Triple-A divisions, and three divisions each for Double-A, High-A and Low-A. Forty affiliates were dropped from 2019, the last season under the old minor league system.

The leagues have not yet been named. Major league owners, Commissioner Rob Manfred and his staff have not decided whether to retain the traditional names of the leagues, such as the International and Pacific Coast at Triple-A, the Eastern, Southern and Texas at Double-A and the California, Florida State and South Atlantic, which had been at Class A.
For now, MLB is calling the minor league groupings Triple-A East and West; Double-A Central, Northeast and South; High-A Central, East and West; and Low-A East, Southeast and West. There are geographic subdivisions within each league.

The Mississippi Braves will be be part of the Double-A South. The eight-team circuit consists of eight former members of the Southern League, split into two divisions.

The other two former Southern League members were Jackson (Tenn.) and Jacksonville. The Jackson Generals were not among the 120 teams to receive a PDL, while the Jacksonville Jumbo Shrimp will become the Triple-A affiliate of the Miami Marlins.

Regular-season schedules are to be announced next week. Schedules will be regionalized and include six-game series to reduce travel and cut expenses, a person familiar with the planning told The Associated Press. The person spoke on condition of anonymity because that detail was not announced.

Each franchise’s top four affiliates will include one team apiece at Triple-A, Double-A, High-A and Low-A. Additional clubs are allowed at spring training complexes and in the Dominican Republic.

MLB said big league teams will be an average of 200 miles closer to their Triple-A affiliates, allowing most to be within driving distance of their parent team, and that PDL licenses will improve facilities.