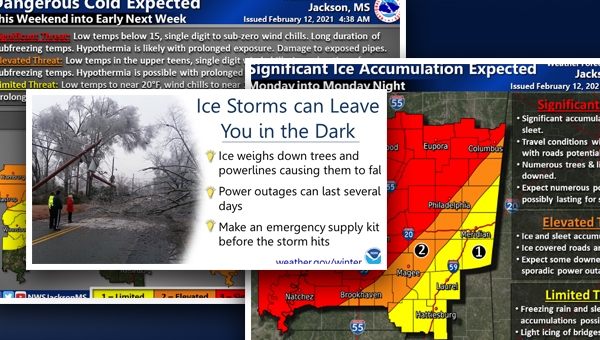 Prepare for the worst: Officials urge residents to get ready for winter weather

Warren County residents can expect periods of frozen precipitation and frigid temperatures as a winter weather system approaches the area, a meteorologist with the National Weather Service Office in Jackson said.

The Weather Service has put the area under a winter storm watch through 6 a.m. Tuesday.

“This weekend we will be dealing with some light ice accumulations a few periods of light freezing rain going into Saturday morning and then again late Sunday morning,” meteorologist Janae Elkins said. “On top of that, we will be dealing with some dangerous cold. The temperatures in Vicksburg could drop to near 20 with wind chills near 10 degrees. Next week, the lows will drop into the teens with subzero chills.”

The forecast for Sunday calls for a 20 percent chance of light freezing rain and light sleet in the evening with lows in the lower 20s.

Elkins said the winter storm will affect the Deep South Monday and into Monday night and the area could be looking at significant amounts of ice and sleet.

Highs Monday are forecast to be in the mid-20s with lows near 15.

And local officials are taking precautions and getting ready for the severe weather.

The present winter storm conditions could go all the way through Saturday morning into Sunday, Warren County Emergency Management Agency Director John Elfer said, “But I think the big thing is going to be on Monday; it’s going to really freeze Monday night into Tuesday and we’ll have to see how much precipitation we’re going to get on Monday. Whatever falls is going to hang around for a while.

“We’re taking record cold,” he said. “We haven’t seen temperatures like this in a long time and it’s a problem.”

Elfer said people need to be thinking about vulnerable adults and children who may not have access to heat and worry about water pipes.

“Make sure you have enough groceries and the pipes are protected and you have sources of heat and as a last resort you have somewhere to go if the power goes out,” he said.

Vicksburg Fire Chief Craig Dancyzk said the fire department is taking additional precautions for the weather, getting snow chains ready to put on the trucks is needed.

“I’ve talked with my battalion chiefs, telling them to have their chain saws and other equipment ready and to make sure they have enough fuel for the devices,” he said. “I hope the public takes this seriously. With the cold and single-digit temperatures and wind chills we could see water main breaks and that puts extra pressure on public works. We could be very busy with wrecks and fires I hope I’m wrong, but it’s something we have to prepare for.

“I encourage people to shelter in place and use Saturday or Sunday when the streets are dry to finish any errands.”

Vicksburg Public Works Director Garnet Van Norman said all the department’s foremen were sent home with trucks in case they are needed for emergencies.

“We’ve got the sand ready to go; we’re just on standby. We’re ready to go, we’ll just have to wait and see what happens,” he said.

Van Norman said the main focus will be on keeping the city’s streets and bridges sanded and open, but said once the temperatures get down to 20, they can affect the waterlines.

“We’re ready,” he said. “We’re prepared for the worst and hope for the best.”

For the first time since Dec. 13, Warren County is below the threshold to be considered a COVID-19 hot spot... read more