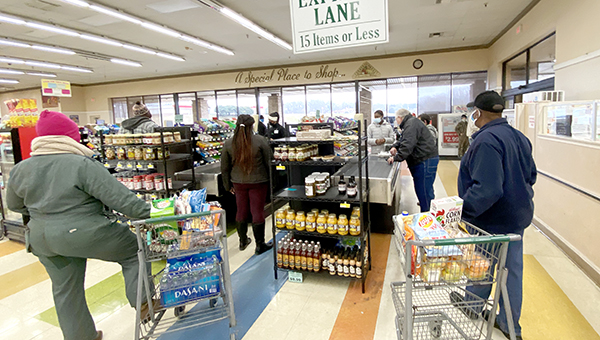 The threat of inclement weather always sends a rush of customers to the grocery store.

Whether it’s to stock up on items that one would need if the power goes out or for comfort food to enjoy while hunkered down, it’s inevitable that parking lots will be full and lines long.

“It’s been pretty busy and consistent since they are saying it’s going to freeze and that it is Valentine’s Day,” Smith said.

As in other winter storms, Smith said it was milk, bread and meat that were among the most popular items flying off shelves.

At Corner Market, on Indiana Avenue, store director Todd Kurtz said they have been busy all weekend.

“It’s been crazy busy and this is the fourth day of it,” Kurtz said. “They are buying everything including the milk and the bread and the eggs. In fact, we were out of milk and bread this morning (Sunday) but we received another truck.”

Kurtz said the larger than normal crowd at his store is always expected when there is a “weather event.”

“They come in and buy real heavy and you would think in the last four days they would have bought enough to last them two weeks,” he laughed.

Kurtz said Corner Market will be closing at 5:30 p.m. Sunday and will reopen Monday afternoon “at the earliest.”

An early afternoon fire damaged a home at 604 Hossley St. Sunday. The fire was one of two Vicksburg firefighters... read more