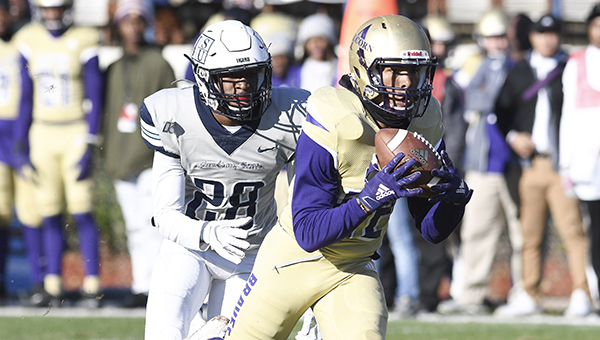 Alcorn State wide receiver LeCharles Pringle (82) makes a reception for a touchdown ahead of Jackson State defensive back Ryan Theyard (28) during a game in 2019. (Courtland Wells/The Vicksburg Post)

We’re two weeks away from the full start of College Football II: Electric Boogaloo, when the Southwestern Athletic Conference and other Football Championship Subdivision leagues attempt to play an unprecedented spring season.

One team, however, has decided to sit this one out.

Alcorn State announced last week that it will not play with the rest of the SWAC, and instead focus on a normal spring practice period. It was probably a wise decision on a couple of fronts.

Between COVID-19 protocols and a lack of available facilities, the Braves have had a hard time putting in their offseason work. They reportedly had not had any sort of organized team activities until early February, which would have left them out of shape and disorganized heading into the season opener Feb. 27 against Alabama A&M.

There was also the bigger picture to consider. The SWAC plans to play a half-season in the spring, and then turn around and play a full 11-game schedule in the fall — a total of 17 or 18 games in eight months, with little or no offseason break. Most teams will finish in mid-April and begin preseason training camp about three months later.

The teams that do play in the spring will likely feel the effects in the summer and fall. Mentally and physically, it will feel like one long slog rather than two separate seasons.

It made some degree of sense, then, for Alcorn to pack it in during this abbreviated season and look ahead to the full 2021 season. At the very least, you can see the logic behind it even if you don’t totally agree with it.

The downside to the decision is a missed opportunity to cash in on increased exposure, and the risk of falling behind those who do.

Two days after Alcorn made its decision, ESPN announced a 16-game television and streaming package with the SWAC that includes the conference championship game on May 1. The package isn’t quite a primetime showcase — 12 of the games will be streamed on ESPN3 and the others will be televised live on ESPNU — although it could turn into a showcase for Primetime.

Alcorn’s archrival Jackson State, and its new head coach Deion Sanders, will have six of its seven regular-season games televised, including two of the ESPNU slots. Jackson State opens its season next Sunday, at home against Edward Waters. It will be streamed on ESPN3.

Alcorn State has won the last two two SWAC championships and an unprecedented six consecutive East Division titles, but Jackson State is coming on fast as a challenger.

A big part of college football is recruiting and exposure, and the Tigers clearly took a giant leap forward in that by hiring Sanders and then hauling in a recruiting class that ranked in the top 100 nationally — among not just FCS schools, but FBS programs as well. Having the bulk of the SWAC’s television appearances during the spring will only enhance Sanders’ rock star status, and that of Jackson State as the league’s showcase team.

Unlike Alcorn, which has been atop the SWAC for most of the past decade, Jackson State also has nothing to lose by playing in the spring. It will serve as an extended spring practice period and allow Sanders to iron out the kinks in his program, something that might have taken most of the normal 2021 season to do.

Alcorn State shouldn’t slip too far by not playing this spring, but it is playing a dangerous game. When it returns to the field in September it could find itself in the strange position of being the favorites to win the league championship, but no longer the favorites of the league.