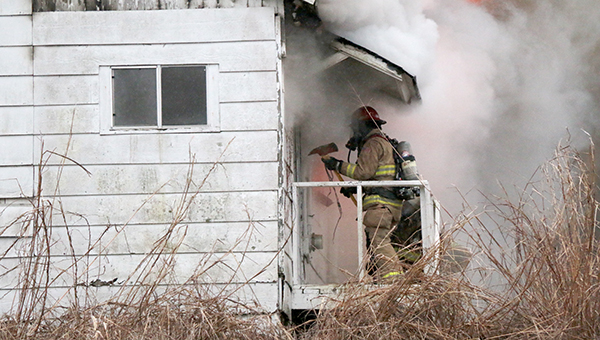 A firefighter enters a burning home on Hossley Road Sunday afternoon. There was no information as to the cause of the fire, but officials said high winds did hamper firefighting efforts. (Walter Frazier/The Vicksburg Post)

The fire was one of two Vicksburg firefighters have responded to thus far Sunday afternoon.

Vicksburg Fire Chief Craig Danczyk said firefighters responding to the 1:25 p.m. 911 call arrived to find smoke and fire coming from the home. He said high wind hampered efforts to extinguish the fire and firefighters were still extinguishing hot spots in the home.

He said the cause of the fire was undetermined. Platform 1, Engine 6 and Ladder 3, as well as an ambulance, responded to the call.

About an hour later, at 2 p.m., firefighters were called to 205 Bazinsky Road after a fireplace fire flashed, burning wood around the fireplace but did not cause further damage.

Engines 5 and 2 responded to the call.