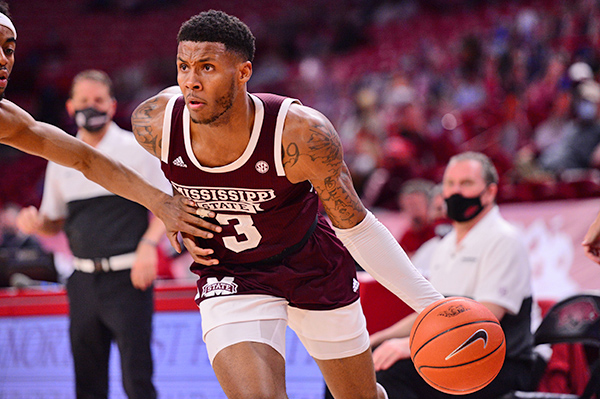 Mississippi State basketball player D.J. Stewart dribbles during a game earlier this season. The Bulldogs’ game at Auburn was postponed from Tuesday night to Thursday afternoon because of the winter storm that hit Mississippi on Monday. (Gunnar Rathbun/Mississippi State Athletics)

The winter weather that covered much of Mississippi in snow and ice also left Ole Miss and Mississippi State’s men’s basketball teams frozen in place.

Both teams postponed games scheduled for this week because of travel concerns associated with the aftermath of the storm.

Ole Miss will now play LSU Thursday at 4 p.m. in Oxford. The game — which was just added to the schedule over the weekend as a COVID-19 make-up contest — will be televised by SEC Network.

Mississippi State, meanwhile, postponed its road game at Auburn from Tuesday to Thursday at 4 p.m. It will be televised on ESPNU.

Ole Miss and Mississippi State will play each other Saturday at 5 p.m. at The Pavilion in Oxford.

A third Southeastern Conference game, No. 8 Alabama at Texas A&M, was also postponed. Originally scheduled for Wednesday night, it will now be played Thursday at 2 p.m. and be televised by SEC Network.

Mississippi State coach Ben Howland said travel issues were the reason for his team’s postponement. Classes at Mississippi State were canceled Monday and Tuesday, as was the basketball team’s practice.

“We are going to try and make it work tomorrow to get to practice. Safety is our first priority … The roads are slick. The airports are closed all today and tomorrow. The airport runways are frozen,” Howland said during his weekly video press conference on Monday. “Hopefully we will be able to (travel) by Wednesday and have things start to clear up.”

The SEC was not the only conference to reshuffle its basketball schedule because of the winter storm. The Southwestern Athletic Conference postponed three games — all involving the league’s Mississippi-based teams — scheduled for Monday.

Valley and Southern will also play a women’s game at 1 p.m. Wednesday.