Not over yet: Snow falls as county braces for another round of winter weather 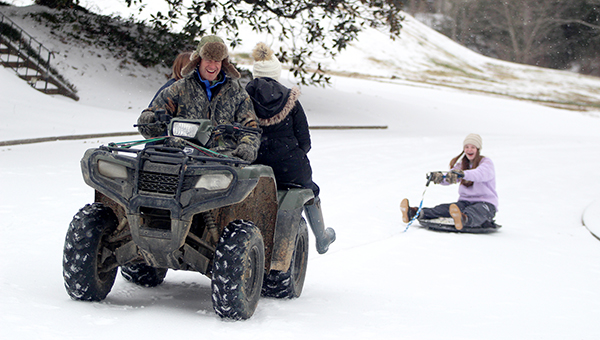 After experiencing a winter storm that dumped up to 4 inches of a wintry mix on Warren County, residents in some areas of the county woke up Tuesday to see snow falling in their yards.

“What we have is some low shallow moisture still in the area,” said National Weather Service meteorologist Logan Poole. “We can expect about a quarter- to a half-inch.”

The snow is the last remnant of Monday’s winter storm that forced most county residents indoors. Temperatures Monday night stayed in the upper teens and did not get below 10 degrees as predicted.

And as people recover from Monday’s event, officials are getting ready for the next storm system forecast to hit the area Wednesday and Thursday.

But whether the area is hit by a rain event or freezing rain will all depend on the temperature.

“If the temperature is above freezing, we can expect rain, if it’s below freezing we’ll have ice. It’s going to be close,” Poole said. Presently, he said, the Upper Delta is most at risk for freezing rain, “But that could move south.”

“This could be an ice event,” Warren County Emergency Management Director John Elfer said. “A decision will be made shortly whether to close the courthouse. Interstate 20 is still dangerous and still closed between Mile Markers 5 and 9. This is going to be bad.”

The forecast for Tuesday shows highs in the upper 20s with lows back into the teens. Highs Wednesday are expected to be in the mid-30s with lows in the low 30s.