Ice storm forecast: ‘Vicksburg is going to be in the worst of it’ 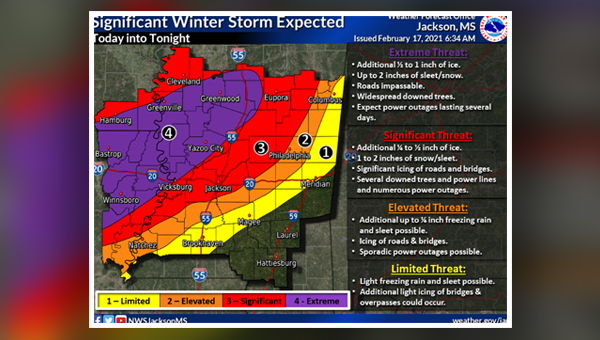 Warren County can expect another frigid assault as a new weather system is expected to bring additional ice and snow to the area.

“It’s going to be rather nasty today and Vicksburg is going to be in the worst of it,”  Mike Edmonston, senior meteorologist at the National Weather Service Office in Jackson, said Wednesday morning. “We’re already experiencing freezing rain mixed with sleet in Northeast Louisiana and the system is east of Monroe, so it should be in your area in a couple of hours.

“What you can expect is one-half to an inch of ice to what you already have and 1 to 2 inches of snow/sleet mix,” Edmonston said. “Roads will become impassable and downed power lines will be possible.”

He said the thawing will continue through Monday as temperatures remain in the 50s when rain is forecast, “But the temperatures will be above freezing so it will be a cold rain.”

“Unless they have to, people do not need to be traveling on the roads,” he said.