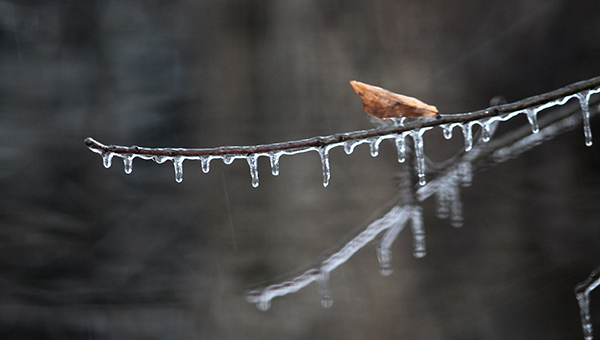 A round of winter weather has brought freezing rain which has started weighing down tree limbs and power lines. (Tim Reeves/The Vicksburg Post)

“I would classify the situation as significant,” Warren County Emergency Management Director John Elfer said. “The roads have iced over; they’re dangerous. We’re starting to see ice on trees and power line and we’re starting to see some power outages. We’ve had some people fall on the ice and had to be taken to the hospital.”

Shelia McKinnis said as of 4:51 p.m. at least 706 people were without power in power outages scattered across the county.

Earlier in the day, she said, crews restored power to 372 customers in the Fisher Ferry Road area after a power line fell and to another 46 customers on the area of First North Street. affecting 46 customers.

“It’s a mess out here,” Warren County Sheriff Martin Pace said. “All the roads are covered with ice and there’s an icy glaze on them. It’s very dangerous.”

He said ice was the cause of a downed tree on Interstate 20 and volunteer firefighters were able to cut it and remove it.

“Unless you have a medical emergency or you must go out, stay home,” Pace said. “All day today and all last night we have been dealing with people who have slid off the road and none of them had any business being out. People need to stay in.”

Ice storm forecast: ‘Vicksburg is going to be in the worst of it’

Warren County can expect another frigid assault as a new weather system is expected to bring additional ice and snow... read more