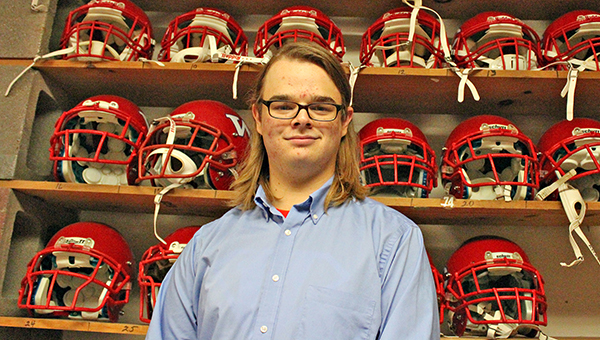 Five years ago, being part of a college football program was not on Jacob Downey’s mind at all.

The then-13-year-old did not play the sport, for one thing. For another, he was occupied with far weightier matters than an unlikely goal years down the road.

Downey was having trouble breathing. His chest hurt. What at first seemed like a mild illness quickly turned into something far more serious.

“Come to find out I had a liter of fluid. Then they found the tumor and it was the size of a 32-ounce cup,” said Downey, one of the football team managers at Warren Central. “My lung was completely deflated. One of my ventricles was completely collapsed, and then my esophagus was the size of a coffee straw. On this day five years ago I was still in the hospital on anesthesia, knocked out.”

Downey was given an official diagnosis of diffuse large B cell lymphoma, a common type of non-Hodgkin’s lymphoma that affects about 18,000 people each year. In layman’s terms, the teenager had cancer.

“I didn’t think it was anything. I thought every kid went through it at one point,” said Downey, who is now an 18-year-old senior at Warren Central. “When you learn about it, it’s a huge nightmare that you wake up to. You’re just hoping it’s a dream. It’s a scary thought.”

Fortunately, while diffuse large B cell lymphoma is considered an aggressive lymphoma it is also treatable and potentially curable. Doctors were unable to remove the large tumor from Downey’s lung, but they were able to kill the cancer cells within it with six months of chemotherapy treatments.

“They couldn’t cut it out. What they think is now there is scar tissue. It was so intertwined with everything in my body that they just couldn’t get it out,” he said.

In the months and years that followed his diagnosis, Downey’s outlook on life understandably changed. He was encouraged to try new things he might otherwise have missed out on, like riding motorcycles.

“You want to spare every moment you have and make the best of every moment. One thing I really love is riding motorcycles. If I hadn’t had cancer and went on my first motorcycle ride, who knows if I would be doing it?” Downey said. “It does have an effect on your outlook on life and you start trying to figure out what you want to do next. I’m glad I came here. It’s been an awesome experience that I’m really lucky to have.”

Downey made another big decision to try something else that was new. At the urging of his father, Todd, he joined Warren Central’s football team — not as a player, but as a team manager.

Unlike some high school programs that use student managers only for menial jobs, Warren Central often entrusts them to manage the equipment room on a day-to-day basis. It is a lot of responsibility for a teenager, almost a full-time job, but Downey took to it immediately.

“He’s impacted our program. He’s been like an assistant coach. We put a lot of responsibility on him. So he has contributed in a very important role in what we do, and that’s going to open doors for him, too. He’s been a blessing to be around,” Warren Central head coach Josh Morgan said. “He took ownership and we trusted it in his hands, which is ideal for a coach. It’s a lot of day-to-day operations. Good help is hard to find. He took it and ran with it, really took it serious and respected that aspect of it, and really did a good job.”

Being a manager at Warren Central has a long track record of opening doors. At least a half-dozen have become managers at Mississippi State in the last 25 years and several have gone on to make it a profession.

Mike Parson spent 13 years with the equipment services department of the NFL’s Houston Texans. Jeff Barlow is currently the director of equipment services at Baylor University. Both went from Warren Central to Mississippi State as managers.

Downey isn’t sure if he’ll follow in their footsteps completely, but will for now. On Feb. 9, five years to the day after he was diagnosed with cancer, Downey accepted a scholarship offer from Mississippi State to work in its football equipment department.

Downey will be on a partial scholarship for the first two years, and can earn a full scholarship in his third.

Downey is the third person this year from Warren Central to accept an offer to be a manager. Pernell DeFrance and Kris Collins took offers from Hinds Community College.

“It’s an awesome opportunity to be able to go to another school and continue what I like to do. It’s amazing,” Downey said, adding that one of his predecessors in Warren Central’s equipment room inspired him to take a closer look at the possibilities of being a manager. “I heard about Hunter Atwood getting a full ride at Mississippi State and I wanted to get that opportunity. From the get-go I had to work hard and do everything right.”

“You like to see guys that do it the right way and go above and beyond the call get rewarded,” Morgan said. “We’ve been able to have that pipeline. The guys that are able to get to that level, what they do up there carries a lot of weight and they want the next one. They carry it on for the next guy, and Jacob will do the same thing. They’ll be wanting the next Jacob before long.”

Downey plans to major in business management while he’s managing the football equipment at Mississippi State. He has a check-up scheduled this summer for his lymphoma, but says he simply tries to live his life and not dwell on it.

“It’s a worry. I don’t think about it daily, but every once in a while I get that question going like, ‘Am I going to get it again?’” he said. “I just do my best to watch what I do and try to avoid it the best I can. If I can’t, I’ll fight it the best I can.”

The fight and the positive attitude Downey has shown over the years, Morgan said, have been inspiring.

“Jacob has been an inspiration to us all. His journey is unique. It’s his own. He’s been able to overcome it and not let it deter him from his dreams,” Morgan said. “Our guys and our coaches know his story, so whether he knows it or not he is a very good example of what we all want to become, and that’s fighters, and to have a great attitude and joy through it all.”