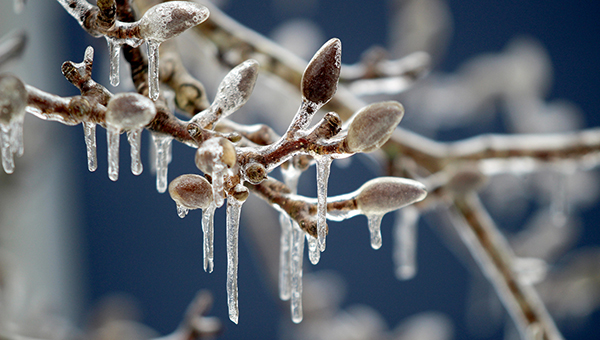 For more than a week, Warren County has been subjected to a severe winter storm that brought inches of ice, sleet and freezing rain, along with a dusting or two of snow in the process. But, Friday afternoon, after more than 160 hours below freezing and with the sun shining, the slow thaw began.

Over the past week, Vicksburg Warren 911 has received thousands of calls for help, rarely used snow chains have been installed on city fire trucks and police cars, and utility crews have spent days searching for breaks — large and small — in the city’s water system.

As of 7:30 p.m. Friday, more than 5,700 Entergy customers within Warren County were enduring yet more time without power brought about by limbs and trees, weighed down by the ice, breaking and taking with them power lines on their fall to Earth.

But, “tomorrow will be better,” Mayor George Flaggs Jr. said. “We truly believe the worst is behind us.”

With all of the ice on the ground and in the trees, it seems strange that water is a problem. But, it has become a major problem.

Beginning Wednesday evening, when the city’s water system began to lose pressure, city officials and crews have been searching for outages, fixing leaks and watching as the pressure slowly returns to normal.

Friday, city officials said leaks in the system, especially those in vacant homes and businesses closed since the winter storm first struck last Sunday, may be among the biggest contributors to the water problems.

Public Works Director Garnet Van Norman said officials do not yet know how many of the city’s 9,000 customers are affected by the problem.

“We’ve been too busy chasing leaks,” he said.

Water and gas superintendent Dane Lovell said some of the buildings that have been unoccupied might have some leaks, “But I don’t know for sure, because I can’t get to them to check,” adding he has been able to cut off some fire suppression systems.

The city had a similar problem Thursday when the fire suppression systems at Vicksburg Forest Products off North Washington Street, Cooper Lighting on U.S. 61 South, and the former Margaritaville Resort on Mulberry Street all broke.

Lovell said city crews are continuing to look for broken and leaking waterlines in the city.

He said water service is on along Washington, Cherry and Jackson streets and some other areas of the city. He said late Friday morning crews were repairing a leak on Belva Drive.

“It’s not 100 percent pressure but anyone who needs water can go to those stations to get water as long as they have it,” Danczyk said. “They will have to bring their own container and we can fill a 5- to-10-gallon container.”

Warren County Fire Coordinator Jerry Briggs said that while the Culkin Water District has pressure, officials are looking for leaks in the system.

Both the Fisher Ferry and Jeff Davis Water districts had water, but had problems in the northern end of the districts which get water from Vicksburg. The Hilldale Water District is in good shape.

Bradley Barnes, general manager of the Hilldale Water District, said all of his customers have water. He said power has been restored to the pumps providing water to the north side of the district, while the south side service is being powered by a generator.

The news is not good for those living in the Eagle Lake area.

In a statement from the Eagle Lake Water District, power outages and breaks have led to lack of water service to its customers.

“ELWD encountered internal auxiliary power distribution problems when our external power source was lost. Coupled with that, the extreme cold resulted in damage to several water distribution pipes which will require repair before restarting the plant,” the District said in a statement. “We currently don’t have a time window when ELWD will re-establish service to our customers, but are doing everything posslbe to minimize the duration of the outage.”

For the five-day period from 12:01 a.m. Monday through 12:01 a.m. Friday, dispatchers for Vicksburg-Warren 911 received 2,339 calls for assistance as two winter storms hit the area.

According to records from the center, between 12:01 a.m. Monday to 10 a.m. Tuesday dispatchers answered 549 calls for help — 155 of those, Assistant 911 Director Bobby Rufus said, involved stalled vehicles.

The total volume of calls between Tuesday and 12:01 a.m. Friday either answered by a dispatcher or made by a dispatcher to another agency or a person calling for service was 3,400, Rufus said.

Warren County Sheriff Martin Pace said he and sheriff’s deputies were continuing to take doctors and nurses to work and people to medical appointments for things like dialysis.

“We are also still helping people whose cars have run off the road or stalled,” he said.

As roads begin to clear and temperatures warm up, state health officials felt it was important to wait just a few more days before resuming vaccinations at Warren County’s COVID-19 drive-thru site.

Warren County Emergency Management Agency Director John Elfer said Saturday’s appointments, which had been rescheduled from earlier in the week, have now been rescheduled.

This marks the fifth appointment day rescheduled due to winter weather, the first being those appointments scheduled for Feb. 12.

Warren County’s drive-thru site, which is in the back parking lot of the former Vicksburg Mall, has been set up to handle an estimated 400 appointments per day. Next week, the site is expected to handle 800 vaccinations as rescheduled appointments stack on top of those already set.

Flaggs: More help is on the way